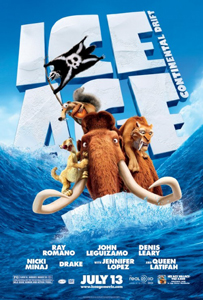 Usually a fourth outing of a franchise is the nail in the coffin, but after a lacklustre third part, Ice Age 4 is actually decent fun!

It is still zany, madcap humour with the pacing of a roller-coaster ride, but at least this time around I actually felt some connection with the characters. This time Manny, Sid, Diego and friends meet the ultimate crisis; the world’s tectonic plates shifting and the land ripping itself apart.

The film sets the tone immediately when Manny is separated from his family during the initial land divide, and it is up to him and his most trusted friends to brave the seas and be reunited with their loved ones.
True, one can be horrified at first seeing Sid’s entire family show up… that’s right, imagine five Sids on screen at once… but fortunately they are gone just as quickly, leaving the rather crazed but funny Granny behind. Manny’s daughter Peaches also has some “teenager problems” that can grate on nerves, but that is only a subplot.
Our antagonists (yes, this film actually HAS antagonists!) are a crew of imaginative pirates sailing around on a iceberg ship, including a monkey Captain, a bunny, a s Ludicrous? Yes. Watchable? Easily; they had me at “an evil badger who doubles as a Jolly Roger flag“. There are some very creative and likeable characters here, and some convincing peril too, putting Dawn of the Dinosaurs to shame.

So okay, pirates aren’t exactly original material, but they make for some decent excitement. Sid is not at the forefront as he was before (Blue Sky learnt a lesson there) only appearing for numerous sight gags. The comedy was stronger too, it felt consistent. Heck, there was even a snide go at the third film by Sid: “We met a load of dinosaurs in the Ice Age, even though that makes no sense!” Nice one.

It is a good kids film, mindless but adults can actually watch it without losing braincells, and while it isn’t a film I would watch again, it is a vast improvement and you could do a lot worse.