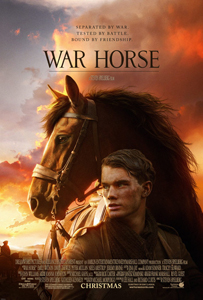 Spielberg is back at it again; tugging our heartstrings and does it with great ease. Yes, I do have a sentimental streak!

War Horse is a film adaptation of a stage play based from a children’s book of the same name, and follows the traumatic adventures of a young man and a horse he befriends during World War One.
When a floundering farmer bids on purchasing a young stallion instead of a plough horse, it is up to the son to train the animal and rescue their family’s farm from debt. Unfortunately after boy and animal have bonded, war is declared against Germany, and the horse is sold to the army. Distraught, the boy also enlists in the hope of finding his lost friend.
I was pleasantly surprised by the quirky sense of humour and love that the film’s characters portray; I was wary of such films becoming heavy and sluggish with angst, but here there is a wonderful balance. The horse itself is a passenger for much of the movie, and we meet the many different faces that care for him throughout his fraught journey, each of them loaded with personality. I did not think the film was crass or corny.

Spielberg does not fail with the war torn environments and rolling hillsides; the brutality of trench warfare is played much like Saving Private Ryan’s Beaches of Normandy.

My gripe with the movie however was very irritating… the Germans don’t speak in German. Spielberg is great at being accurate, and there’s a scene included with a British soldier meeting a German officer and he notes: “You speak good English”… Yes, and so does the entire German army! It made scenes set within German ranks quite unconvincing, and I think some added tension was lost in later scenarios. Spielberg should definitely have known better!

Still, I don’t believe this to be a entirely destructive criticism; the film is wonderful and the final act is unquestionably powerful. ‘Will I cry’, you ask?
Of course you will.