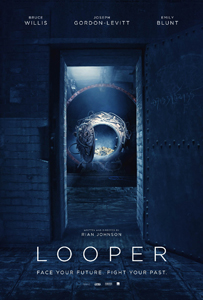 A unique, stylish, modern science fiction thriller that keeps you interested without exaggerating it toys but involving you with its characters.

The film is set in the near future where Joe (Joseph Gordon-Levitt, in his hundredth appearance in film this year!) works as a “looper”, an assassin who kills people sent back in time from the future, a future were time travel is controlled by a criminal syndicate. Joe however finds his next victim to be his future-self, and both men struggle against each other to resolve their different (yet similar) struggles.

The film sets up everything you need to know very quickly; you become accustomed to the idea of time-travel easier here than you’d expect. This is possible due to the film’s focus on the characters rather than the technology, it doesn’t deliberately confuse you, it prefers to keep things close to its chest.
While it is possible to blast holes in the story’s logic (which time travel movie can’t you do that? … Okay, maybe Back to the Future)
One such idea the film has is when a man from the future is in the present, and his present self is changed, he immediately changes too, ie: a character is tortured, and the future self loses fingers suddenly (a really grisly but incredible idea, I loved it!) but without any consideration for the thirty-odd years inbetween where the man would have known and adapted for this past event (and the film does state that memories change too).

However! To avoid falling into time travel mumbo-jumbo, these grievances are happily ignorable, because we get some of the best young-and-old actor casting since Men in Black 3. Joseph Gordon-Levitt and Bruce Willis are near perfect, and carry the same character going through different traumas seamlessly, which is oh so crucial as we see how they develop as individuals (and in doing so we learn about the singular man). Also, if you are expecting Willis to be the usual do-good hero… think again, this film is full of strife and personal conflict!

I’ve only scratched the surface of this film, I came up with plenty of subtexts while watching this, and there’s the supporting cast and the ultimate story behind the hero(es) all of which is excellent. Great to see Willis can still pick out the good films!

Definitely my sort of film, if you like science fiction films like Source Code etc, subtle and lacking in CGI effects, you will enjoy this a lot!

Additional Marshmallows: Director Rian Johnson was also the man behind the intriguing Brick, a film I really need to watch again!