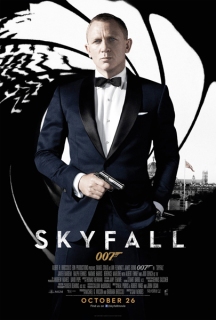 Skyfall marks a defining moment in the franchise, a make or break decision to scale things down, tighten the characters and their histories, to become more the thinking man’s Bond. The film does not break in the attempt.

We find Bond on assignment and liberated from the rage that had once consumed him; he is a complete agent now as he tracks down stolen intelligent that gives names and locations to undercover MI6 agents. Bond however is shot accidentally, and must recover in time to stop the further sabotage of the British Secret Service.

How incredibly different this film is to the messy, ham-fisted Quantum of Solace, I can actually see the action this time! The pacing of the film is steady, everything is given to you in malleable amounts yet maintains an intelligence not seen in Bond films since On Her Majesty’s Secret Service, Licence to Kill or perhaps From Russia with Love. The camera and direction slowly relish the locations, people and vistas with care and attention.

Not to say of course that the action set pieces are toned down completely, this is a Craig film; we still get incredibly kinetic and real action! I can understand how Daniel Craig wants to do more while he is physically able; especially with Skyfall’s opening chase that involves a train. I know I’ve not seen a train chase like that before!
The charisma is still there too, Craig possibly giving his best performance yet, taking advantage of this more human Bond. The womanising Bond trait is quite restrained; there is less focus on a “Bond Girl” relationship (which is impossibly refreshing at this point!) and all of the film’s focus goes into Bond’s relationship with M (great to see Dudi Dench being given presence!) and her connection with the film’s villain Raoul Silva.

As seen in the trailer the franchise gives us a new Q character, played by the young Ben Whishaw, whose age brings an enlightening new angle to the character’s relationship with Bond. Asides Q there are plenty of references to Bond’s past, but not hammered home bluntly, and they are often used with great comedic effect! Yes, there is a great sense of humour beneath the espionage heavy story too.
“A gun and a radio,” Bond mutters to Q about his new gear, “Not exactly Christmas, is it.”
“What were you expecting… an exploding pen?” Q parries wearily, “I’m afraid we don’t go into that sort of thing any more.”

Skyfall, in my opinion, is a startlingly realised Bond film. Clearly someone wanted to show characters rather than icons and this may well divide audiences; some may want more grand scale, world-threatening stories from Bond. Personally, it intrigued me from start to finish.

Great opening theme and intro, an excellent homage to the 50th Anniversary, and a film that promises even more from Bond!

Additional Marshmallows: My only concern for the franchise, is that they stuck the traditional gun barrel opening sequence at the end of the film again… I… don’t like this! But, the film uses the Bond theme effectively; the score was awesome, so I suppose that makes up for it.