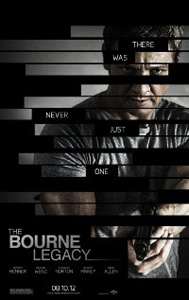 An almighty cash-in, or for once a clever spin-off from the Bourne trilogy?

I’m afraid mostly the former. Now I was suckered into the trailer for Legacy, and even the tagline: “There was never just one” I couldn’t argue against, after all, Matt Damon’s Jason Bourne was part of a super soldier program. Plus this film takes place during the events of The Bourne Ultimatum, the third (and most exciting) in the trilogy.
But unfortunately what we get is a pretty big case of “missed opportunity”.

Aaron Cross is another man with no past, but unlike Jason he was not part of the Treadstone program but a sister program were participants are trained and enhanced with pills. When Jason Bourne’s actions trigger the Treadstone program’s assets and agents to be erased, the same must be done for the other programs and Aaron finds himself hunted down. His only ally is a scientist, Rachel Weisz, who is also marked.

The film takes an age to get started. We are subjected to an onslaught of crazy editing and ambiguous character development as the film tries to establish Ultimatum’s storyline, Aaron’s storyline, the multiple programs, and how these relate at all. When things go wrong, the film has the unsettling sense that something more interesting is happening elsewhere (read: Ultimatum). Most of the dialogue dissolves into “What’s going on??” “I don’t know anything!” for nearly half the film, poor Edward Norton is given little to do except tell brainless executives over-and-over what’s happening.

The action is crammed into the last thirty minutes (yes, I checked the time…) and it is greatly underwhelming. In fact, the whole film is underwhelming. It is terrible because Jeremy Renner plays an interesting variation on the Bourne character and there is potential in some scenes, but the story around him is such a rehash that I couldn’t find myself caring.

Not enough synchronicity with the previous films, if establish characters had been used more I may have accepted Legacy as more than just an unnecessary addition. I love the Bourne trilogy, and perhaps Legacy would benefit as part of a film marathon… but I somehow doubt it.

Additional Marshmallows: Massive kudos for using Moby’s Extreme Ways at the end credits though, that’s the sort of consistency I love.