Less than two weeks ago director Tony Scott passed away, and Hollywood lost one of its better contributors, a director whose films felt kinetic and real in an era of visual effects and padding. His films were often style over substance, and while his older brother Ridley Scott often directed cerebral movies, his films were always entertaining on the level that cinema should be.

I wanted to make a trilogy review covering the variety of his work, but there were just too many I wanted to watch! I hadn’t fully realised quite how many of his films I watched growing up, and recent films I had enjoyed a lot.

So here we are, three films that I feel encapsulate the man’s talent and abilities. 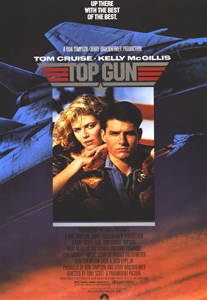 Director Tony Scott’s second movie may be a hit or miss with critics, but it now has a loyal cult following for its boyish action sequences and roaring 1980s soundtrack.

That’s about as thin as the plot gets! The charismatic but reckless Maverick (Cruise) is living in the shadow of his father’s death, driven purely to prove himself to his commanding officers yet unable to stop bragging. His wingman and best friend Goose looks to taking care of his family, while competition lies with Ice Man (Val Kilmer). You already know how the plot goes, provided you haven’t somehow seen the film yet!
Top Gun is a guilty pleasure now, certainly in regards to its script which is positively brainless at times! The middle of the film somewhat drags as Maverick’s romance with Charlie (Kelly McGillis) flounders around like a High School drama (the pop song “Take my Breath Away” became exceedingly repetitive after a while) while life outside the aerial dogfights felt like story padding. These guys take Volleyball way too seriously (Vollyball, really?) never mind the homoerotic undertones. Probably to wake up the female demographic during all the fighter jets and military jargon!

But, the action sequences with the F-14 Tomcat jets is still gripping and still awesome to watch, it is easy to understand why there hasn’t been a film like Top Gun since; how can you do better than this? I challenge you not to get excited when “Danger Zone” starts playing! I’d have happily watched two hours of jets taking off from an aircraft carrier, let alone flying around!

So it is mighty silly at times, but the nostalgia for this film is intoxicating and the aerial footage is second to none. It is a blissfully 80s experience.

Additional Marshmallows: Tony Scott’s success with Top Gun got him signed up for the Beverly Hills Cop sequel, and guess what I am reviewing next! 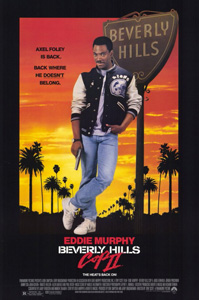 This action comedy sequel gets a new style with director Tony Scott’s hand, but leans more towards action than comedy, making it an overall enjoyable movie.

Notoriously rebellious Detroit cop Axel Foley (played by the ever grinning Eddie Murphy) is back in Beverly Hills when a string of mysterious robberies and attacks occur, each with a sinister calling card from the “Alphabet” criminal. At odds with a useless Police chief, Foley ropes in some old friends and uses all the unofficial means at his disposal to uncover the conspiracy.

It has been a long time since I watched this, but two things struck me: how surprisingly low key the comedy is; and how violent and adult orientated it is. Certainly if this was made now, it would have been a 12A and wouldn’t have featured blood splattering about or a party hosted by Playboy!

Now there are plenty of funny moments in there don’t get me wrong, it uses Murphy’s ability to talk alarmingly quickly to full effect; most of the comedy comes from Axel’s ludicrous lies and tall tales to get the investigation going. Still, I prefer this to any of Murphy’s current films!
It is clear that Tony Scott had a great art of making a film eye catching. This film has a cookie cutter plot, and the comedic detours easily distract you from the larger picture, yet it is entertaining and wants you to keep watching.

Not perfect, but overall very enjoyable. Totally stuck in the 1980s!

Additional Marshmallows: Did you know Sylvester Stallone was originally to play Axel Foley in the first movie (as Axel Cobretti) with more action and less comedy? This is hinted in the sequel with appearances of a Rambo poster, and a poster for Cobra (which also starred Brigitte Nielsen) as well as one of the characters cursing Rambo’s name in the film’s finale!

Clarence Worley is a nobody working in a comic book store until he meets call-girl Alabama and they instantly fall in love. Taking it upon himself to defend her, he kills her pimp and steals his stash of cocaine. Believing they are free of their old lives when they sell it, the unhinged couple are stalked by the gangsters looking for their missing drugs.

I’d seen True Romance before, and now I’m surprised I didn’t remember more of it, the entire cast is larger than life with some crazy (but effective) casting decisions; Gary Oldman as a pimp with dreadlocks, brad Pitt permanently stoned on a couch? There’s some bizarre stuff going on here! Director Tony Scott was given the task by Tarantino when he wanted to make Pulp Fiction his second movie, and he does a great job at handling the huge variety of characters and wild storytelling.

I believe what bothers me about it is how fractured it becomes towards the end. We are given so many characters all of a sudden, and while it does play up the chaos our two leads find themselves in, it does get a little overwhelming and unfocused, especially with its jump into ultra-violence.

It is a relatively straightforward story, but has plenty of unorthodox character acting from actors you wouldn’t expect to play such parts, and that makes it worth watching. Plenty of violence and dialogue-heavy scenes to keep any Tarantino fan happy, but not exactly a Tony Scott venture.

I had a great time watching these old films again, and I am now looking to find his first film The Hunger, which I have not seen yet!

Perhaps True Romance wasn’t the best example of Scott’s own talents, but it proved the man could handle any task, and taking the reins of a Tarantino movie cannot be an easy task! The same with Beverly Hills Cop 2, a sequel to a successful movie, yet a sequel I personally remember better than the other two in the trilogy!

I would have reviewed Days of Thunder, since that was another film I remember when I was younger, only my memory of that film is similar to that of Top Gun, and I didn’t want two similar films in a trilogy review. I also thought about Man on Fire, and while that deserves mention, I wanted to review films that people may have forgotten were Tony Scott’s handy work.

A relatively short filmography, but I hope we do not forget his unique talent for fast-paced, kinetic action, especially in his brother’s lengthy shadow.