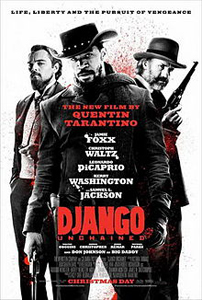 After seeing Django Unchained it is a wonder why it took Quintin Tarantino so long to make a Western!

Set in 1858, “two years before the Civil War” we follow the slave named Django (Jamie Foxx) when he is freed by a German bounty hunter (Christoph Waltz) who needs him in identifying some of his bounties who work as slavers. Django, with Dr Schultz’s help, seeks to liberate his wife who has become the property of a sadistic and ruthless slave owner.

Watching a Tarantino film is always a mesmerising experience; you never quite know what he is going to do next, and they are always delicately balanced between lengthy dialogue scenes and intense violence. Django is absolutely no exception, perhaps being one of his best paced and… dare I say “traditional” film, yet. Foxx and Waltz carry the first half of the film themselves, Tarantino’s witty, sly writing coming strongest from Waltz’s performance as the unorthodox bounty hunter; he is instantly likable.

The heroes are given so much screen time that their chemistry grows perfectly as they travel across country and Django shows his skills as a gunslinger. The villains are held back until the end, but the heavyweight performances from Dicaprio and Samuel L. Jackson are awesome and they clearly relish playing real antagonists for once.

The film’s use of language gives Tarantino all the controversial weight he could ask for, Django is a film that immerses itself in the time and culture without pulling its punches. Some people may be shocked by the use of language, but it only adds to Tarantino’s unrestrained style. Despite the film having the usual trappings of its director, it does have some very sincere, quiet moments, and so it should with such a weighty subject as slavery.

Django Unchained is a great success from Tarantino, the man is only improving with age and experience; showing excellent film making abilities and know-how! I would say it is better than Inglorious Basterds. It is enjoyable, it is bloody and violent and it is surprisingly thought-provoking. Oh, and it has a rocking soundtrack!