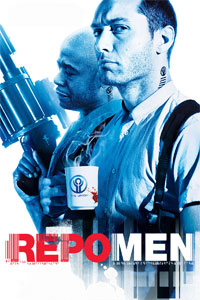 So I’ve spent months tracking down this film, this gory near-future thriller, yet Repo Men doesn’t quite do as much as it could have.

Jude Law and Forest Whitaker are two ex-soldier buddies working for The Union as “Repo Men”. The Union is a corrupt government repossession organization, but instead of just housing repossession and other regular things, this future involves body parts. Have a failing lung? Get a new one and simply pay for its service. Stop paying for any reason and the Repo Men will find you and take whatever it is back.

The story begins and investigates Law’s character’s dividing loyalty between his dangerous, bloody work and his family. He wants out, yet his colleagues don’t want him to give up with the skills he has. After an accident with a client, he finds his world turned very much upside down…

The premise of Repo Men is quite compelling, if a bit ludicrous, and as a science fiction fan I was curious. The film has rapid pacing, which is good; it chucks you around with a simple plot and predictable twists and turns. The gore involved is very sickly and can make you squirm at times.

My problems with it though… is its tone. This film doesn’t have a clear identity to me; it goes from playful black comedy (the Repo Men enjoying their day-to-day work) to very straight and sincere, taking its reality as genuine. The latter makes the film’s climax (what could only be described as scalpel-fetish? Surely the most talked about scene in the movie…) both sick and more than a little silly.

I was quite disappointed, this is no Looper, Minority Report or even In Time. The soundtrack is uninspired and the visuals are (except for a couple of short moments) drab and uneventful. When the plot is quite standard and the twists this deliberate, there isn’t much else; I’d say Repo Men is for Science Fiction fans only.