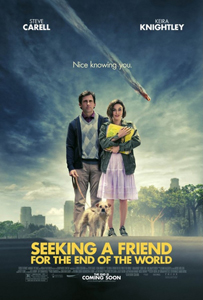 In classic Cinema Cocoa style, the one type of romantic comedy I enjoy would involve the end of the world.

Steve Carell and Kiera Knightley star in this little picture about two neighbours who only just get to know each other when flung together weeks before a meteor is set to destroy all life on the planet. How will two strangers want to spend their last days?

Okay the term “romantic comedy” is a little heavy-handed here, Seeking a Friend is almost more like a quirky drama. The film opens with the radio announcement stating that the last attempt to stop this doomsday meteor has failed, leaving Dodge (Carell) in limbo as his wife leaves him immediately.
We see a fantastic cross section of society before the end of days, and how individuals treat their final days. Of course we see riots in major cities but this is sidelined for more unorthodox characters as Carell and Knightley travel across the country, meeting all sorts of people. One of my favourites being a lowly Police officer who is desperate to maintain the Law. Pointlessly, but that is clearly how he is coping with the bleak reality around him. Him and Carell’s house cleaner, she was amazing.

It is my sort of comedy because the comedy comes from extreme circumstance, yet could be grounded in reality. Steve Carell is great in this, and again I prefer seeing big name comedy stars playing more muted, secluded roles. I found myself sympathizing with his view of people around him.
The only, only small gripe I have (and it could be a bigger gripe for others) is Kiera Knightley’s character Penny. She’s… a little strange. “Kooky” would be the popular term. Quirky and overly-optimistic. I guess I had trouble working out how her personality could react to their situation in the way that it does; she often acts randomly. Carell’s character in contrast is completely grounded. Minor gripe, as both characters have similar heartfelt goals and you warm to her quite quickly.

I really liked Seeking a Friend for the End of the World, it shows the surreal human nature that would likely come from a potential doomsday with great honesty and quirkiness. All those wild things you claim you would do in that situation, would you actually do them? Some of us would just like to pretend it isn’t happening, or to just have a nice quiet day with those we care about.