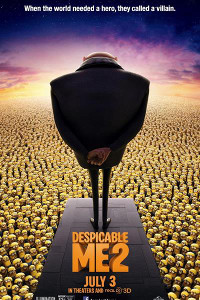 The sequel boasts no lack of the original’s manic energy and colour, and while it is very child friendly and colourful, it is a mindless distraction.
Supervillain Gru has now left the life of villainy behind and is living with the three girls and his minions. But he is called into service of the Anti-Villain League to track down another supervillain and he’s paired up with Lucy, a secret agent. Meanwhile someone is abducting the minions.
The film has no lack of energy, and it maintains the first film’s glossy, colourful visuals and great soundtrack. It is a feel-good movie, a film designed for kids and families looking to relax and be entertained.
I will say that it doesn’t have the first film’s moments of clarity nor does it take the time to calm down; whenever the plot would normally stop to breathe and set up some imagery or establishing shots the minions jump in and act crazy with a ton of sight gags. The film definitely wants to get these little yellow guys into as many outrageous costumes as possible!
Watching this film makes me realise how I like Gru… when he isn’t happy. Since leaving supervillainy, Gru is much happier and as a result, less interesting. The film has replaced his personal conflict of villain-turned-good guy for the confrontation of love, dating and relationships with women. How original!
Enter Lucy, agent for the AVL, who is step up as a… you guessed it… romantic interest. Lucy isn’t the most interesting character either; it took a while for me to warm to her cheeky, kooky mannerisms.
I actually think I prefer the first Despicable Me to this one, and I am definitely in a minority by saying that! While I did love the visual flair, the originality, the funny moments and the soundtrack, I found the attempts of developing characters (which the first film needed) to be lacking and a little unfocused.
It felt a little like someone shaking shiny keys at me to keep my attention.

Additional Marshmallows: I still find the three little girls to be the best characters, at least alongside Gru, and this film didn’t really know what to do with them… except provide a really weird romantic subplot…