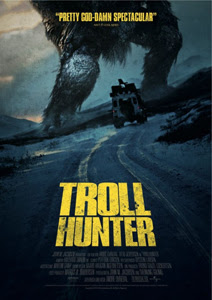 An entertaining found footage film from Norway with only a handful of odd inconsistencies letting itself down.

In the same year that Monsters was released (a terrible, terrible movie) there was a little known monster movie released from Norway. Troll Hunter follows a group of three student film-makers who investigate a series of bear shootings, only to stumble upon a man whose career is to hunt and kill real trolls.

The film has all the cliches from your average found footage film, memories of Cloverfield and Blair Witch will come to mind while watching, but the film has some merit. The students are taken on a journey by the hunter, called Hans, who has had enough of his secret, Government driven job and would see it end by having footage of the trolls released. Good sense of purpose and drive for everyone involved, and especially for filming it all!
The special effects are a little dated given they weren’t blockbuster budget levels, but a little suspension of disbelief can get you immersed in the fantastic world. I would say the effects improve over the course of the film, strangely; you’d think the first troll would have all the effort put into him.

However, the characters are pretty uninteresting, at least in regards to the film’s lack of giving them any real personality; I didn’t feel like I got to know them. They were certainly likeable (which is more than I can say for Cloverfield or Diary of the Dead…) just not very fleshed out. There were a lot of inconsistencies too, plot points given and then dropped only scenes later, its lore felt lost and some of its suspension of disbelief is hard to swallow. The man working at the electric power station never questioned why pylons exist only to be placed in a circle and not power anything? Really? (They even question this oddity in the script, but it goes nowhere)
The film’s only cohesive structure is “road-trip scene, troll encounter, road-trip scene, troll encounter” repeat. This gets a little tiresome and makes a relatively short film feel long.

But it has its merits, and while I had trouble getting all of its “comedic” elements (must be a Norwegian thing) I can’t say I didn’t like it. Characters were nice, trolls were cool, Hans was awesome in a reclusive way, and Norway was photographed extremely elegantly at times, great landscapes. It’s just that more work on making things believable would have gone a long way.