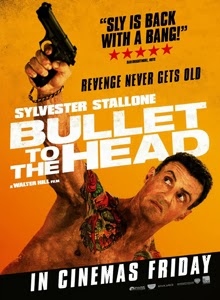 Stallone returns to more self indulgence as he stomps around, growling and shooting every man he sees. Oh, and he reminds us that he’s old now.

A thug-turn-vigilante goes for revenge against an organised mob boss after his partner is killed, while a young police officer wants to bring the same mob to justice.

Stallone’s persistent need to resurrect the old 1980/1990s violent action movies surely cannot be more unremarkably transparent than with this offering. Bullet to the Head, by definition, is already brain dead before it begins.
As the film progresses through the typical revenge plot, the scenes quickly get recycled as though the writers had nothing better to show: Stallone and cop partner Sung Kang argue about how he doesn’t trust cops; makes a racial slur; Kang argues how they shouldn’t just kill people, Stallone kills them anyway; Kang goes his own way, only to get caught before being swiftly rescued by Stallone. These elements repeat over and over in one form or another, the entire second act is nothing but this and will quickly lose the attention of the audience.
Kang and Stallone’s dialogue is straight from Die Hard 4.0, (which in light of Stallone’s recent remarks on Bruce Willis, makes him a bit of a hypocrite) “Stallone is so old he doesn’t know what a cellphone is capable of these days”, probably Kang’s only moment to shine above the old brute.

Stallone’s “lone wolf”, old, aged hero antics get positively trite at the film’s conclusion where he turns his back and walks away (to deliberate “walking away” music) twice in the space of four minutes.

Sure, it is dumb and completely unremarkable, but at least it does what it means to do; throw-away violence. This film is better (marginally) than A Good Day to Die Hard for example, but that isn’t saying much is it? I respect Stallone’s ability to continue making these films, but I wish he made good movies with this endless energy.

The only good to come of this film is Jason Momoa, who you might know as the man who played Conan in the remake of Schwarzenegger’s classic, and really, I’d like to see a film like this with actors like him in the lead role.
Oh, and Christian Slater is in this film, that was funny. But he should have had a bigger role, like he should have been the lead villain!

If you want to see Stallone shooting every single man in sight and act like some impenetrable shield of self-righteous fury, watch this movie. Otherwise, you will probably forget it all after a couple of hours.