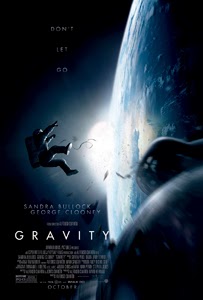 As the film is quick to remind us: Life in space is impossible, and never has this been more apparent than in the new film by Alfonso Cuaron (director of Children of Men).

During repair work on the Hubble space telescope, a massive debris field destroys most of the repair team’s operation. Incredibly isolated and with very few options open to them, Ryan Stone (Sandra Bullock) and Matt Kowalski (George Clooney) must find a way home before the debris field orbits back to them again.

What can one say initially about Gravity? It is certainly a unique film experience (and I’m all for those!) The first couple of minutes are complete dead silence as we drift above Earth, and that’s right, we start in space, no preamble.
The first act is easily the most disorientating, both from the terrifyingly silent visuals of mass chaos around our heroes, to the simple idea of being so vulnerable and at such dizzying heights.
The visuals are breathtaking, from the vastness of Earth below to the intensity of the void beyond, even when chaos breaks out, the fragmentation of equipment and objects is incredible. Of course, it isn’t just a visual treat, the film does one thing subtly and very well; it doesn’t over-explain things. Our characters may be isolated and alone, but we get a wealth of character from the few things they talk about. There are no flashbacks! There are plenty of opportunity for them, but the film maintains its claustrophobic atmosphere and does not break from it. Clooney and Bullock both give good performances, especially from her, carrying a lot of the film as a rookie astronaut.
It really captures the danger that comes with such conditions, the camerawork lovingly pans wider and wider, showing how exposed people are to the empty vacuum. It is something of a testimony to human ingenuity, but also frailty.

It is a very short film, and in some respects it is a one-trick pony, but damn does it do the trick well! I’d recommend seeing this on the biggest screen possible (a small screen will lack the vastness of our characters’ peril) IMAX would be stunning. The 3D was certainly a welcome addition too, one of the better implementations I’ve seen!

Gravity will impress everyone, and no, asides some initial disorientation, I didn’t feel sick!

I tried to not say “vast” or “vastness” too often… surprisingly difficult!