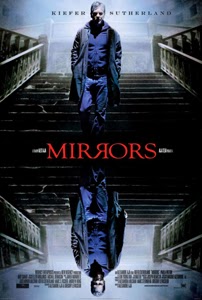 A decent little horror/thriller, unique with a few notable scenes, even if it is a remake of a Korean film five years previous.

Kiefer Sutherland plays a cop and father who is trying to redeem himself to his family after alcohol abuse by taking the job as a night watchman at a burnt down shopping mall. However, the previous guard had committed suicide, and Ben quickly discovers there’s something unnatural occurring within the mall’s pristine mirrors. His investigation leads to something so dangerous it threatens not only his life, but the lives of his family.

Okay, so Mirrors isn’t going to change your life, no horror does these days as we have seen almost everything before, but for such a small and simple premise, it does really well.
We’ve seen it before, you know that scene, in every horror film where a character looks at a mirror, looks away, then something behind them when they look back? This film exaggerates that effective jump scare into an entire feature. So yes, Mirrors has cliches, it takes some liberties here and there.

But I enjoyed its simplicity, and its pacing and its main character Ben. Sure it is Kiefer “Jack Bauer” Sutherland, and the man has a presence about him, but there is a stand out scene early on. Ben is drawn to a room within the burnt out mall, and a mirror shows him a screaming woman’s arm reaching from a doorway (there is no one there, in reality). The mirror is placed so that is all he can see, but instead of him fleeing, or the scene ending, he actually picks up the mirror and drags it to the doorway so he can see who is there!
I don’t know, I just found that sort of thinking from both character and script quite refreshing.

While its pacing an uniqueness are enough to sell me on it, I will admit it does lose itself towards the end as it escalates the scenario. Mirrors does best with its haunted atmosphere, Ben’s psychosis and the mirrors (which you begin to see everywhere!) Having said that, when it does gore, boy does it go all the way!

I recommend Mirrors to people looking for a simple, easy scare, its more compelling than a lot of what the genre gives us nowadays.

I guess I have to hunt down the Korean film Into the Mirror now and see if tradition rings true and it turns out to be superior to this. Conversely, dare I see the sequel, Mirrors 2?
Advertisement