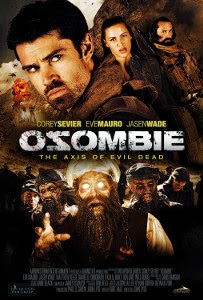 I’m sure these days it is said: “Anyone can make a zombie film”. Ozombie is proof that this is not the case.

Oh okay, as soon as you know the premise, you’ll know that you cannot take this seriously, and it shouldn’t be,  but even as a spoof it is terrible.

So, after her brother Derek goes to Afghanistan in a wild revenge plot to kill Osama Bin Laden (despite by all accounts he was already killed), a Yoga instructor called Dusty joins a troop of soldiers to look for him. The team are out in the wilderness to hunt down the resurrected Bin Laden and his zombie horde.

Yeah, its one of those films, you know, the ones you watch with friends when you are all drunk? I can only compare this with the likes of Uwe Boll movies, yet… marginally… this deplorable, talentless waste of time is better than his movies.
It has zero charisma, despite how the dialogue is permanently set to “witty banter” mode, it doesn’t even make particular fun of itself; there’s no moment I felt like these actors were reveling in the stupidity.
The action is terrible and scenes are both poorly edited and poorly implemented, for example: a soldier gets jumped on as they are all standing in a circle facing each other, in a open clearing. How did no one see that zombie?
Our token woman in the squad has a samurai sword (for no given reason, I might add) and while in several shots the sword doesn’t even have a physical blade, she clearly does not hit zombies through the head, yet they die anyway. Heck, in one scene a horde of brain-eaters just ceases to exist, failing to survive the film’s editing.

Our characters are bland, the soldiers’ only have back story when they are seconds away from dying. Derek is about thirty years old, yet clearly has the brain of a twelve year old. While I was greatly disappointed Dusty shows no sign of being a Yoga instructor… Come on, it SAYS that on the dvd BOX! She isn’t even inconceivably wearing Yoga gear in the middle of a battle, that’s how not joyfully silly this thing is.

Yes, I said it. This spoof film isn’t even that outrageous, it isn’t even Machine Girl silly, verging more towards Battle: Los Angeles levels of blandness. Why has it even got an 18 certificate?? There’s blood yes, but not that much, there’s no noticable bad language, no sex and no nudity, or even extreme gore or violence outside zombies getting shot in the head (sorry to sound so disappointed, but that’s generally what makes things 18 rated!)

So no, spare yourself the trouble, unless you have a bunch of friends to watch this with while drinking yourselves senseless. The only grace this film had was a surprising amount of semi-realistic military hardware (NOT including the terribly CG animated helicopters. Yeah, apparently it is possible to animate helicopters badly)

Additional Marshmallows: Watching films like this, I find myself asking more logical questions than I should be, but that’s what happens when you’re given such a bizarre premise.

If you have soldiers sent against zombies, knowingly and willingly, surely you’d give them a means to end their own lives relatively painlessly? No, all these guys have is a friend planting a bullet into their face. Yeah, I’m sure their family will be happy to receive that body!