Before The Fast and the Furious came along, Vin Diesel played an iconic part in a little known science fiction thriller Pitch Black. Asides from a bit-part in Spielberg’s Saving Private Ryan and voice work in The Iron Giant, this film projected Diesel into the mainstream as it gained cult status and following.

Why is this such a big deal? Because Diesel wants more money making franchises? Probably. But the character of Riddick himself is very interesting, but there are some strange creative decisions being made…

A reasonably well budgeted sci-fi thriller that puts all its time and effort into atmosphere, visuals and a tone of gritty desperation.

When a space ship carrying civilians accidentally crash lands on a barren planet, the survivors must deal with whatever had killed the population that had once settled there. However their ship was also host to transporting a vicious criminal, who’s under custody of an unruly law enforcer.

Pitch Black has a very regular premise: who can be trusted, and who will survive, but it has a great sense of build up and visual flare for such a small project. The key characters are fleshed out nicely and their personalities are warped and changed as the situation escalates. Vin Diesel, who plays the criminal named Riddick, steals the show with ridiculous amounts of dry, uncompromising wit and cynicism. Radha Mitchell definitely gets a mention too, as the ship’s pilot-turn-leader who has the most pressure on her as she must control her merciless male counterparts. She really becomes the heart of the team, and possibly the most relevant character of the entire series (not that you would know this from watching the sequels…)

The film has a good sense of humour when it needs to, not always gravitating around Riddick though quite regularly. It breaks up the overbearing tension that builds.
Certainly some audiences will find its opening and secondary acts a little slow paced; the film’s dedication to landscapes and oppressive deserts and darkness might alienate some. But in today’s climate, where films constantly blow things up and shoot people throughout, Pitch Black‘s restraint in holding all of its cards to its chest until the final forty minutes is a real credit!

It is one of my favourite science fiction films, and stands the test of time given it is thirteen years old (now I feel old….) and I would recommend anyone interested to see this film! Especially if the new film, Riddick, is the money-grubbing remake I think it is… 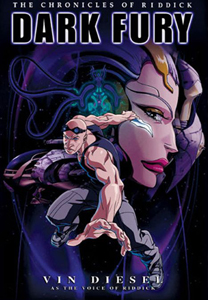 Set mere moments after Pitch Black’s conclusion, Dark Fury is an animated short designed as a bridge between that film and its sequel.

We join the action when Riddick and the other survivors are caught in their skiff by a massive mercenary ship. The mercs are led by a sadistic woman who has a fascination in catching criminals and preserving them, statue-like but still alive. Riddick must battle his way out of her clutches and protect the survivors he now owes his life to.

I saw Dark Fury after seeing the sequel The Chronciles of Riddick, and how can you blame me, they both released in the same year. Directed by Peter Chung who has done work for The Matrix “Animatrix” shorts as well as creating the Aeon Flux animated series (NOT the live action film…) I find his animated pieces incredibly fluid and kinetic. It is a distinct style and quite unforgettable. Dark Fury also benefits the return of the actors from Pitch Black providing their voices, giving a near seamless transition.
It is only thirty-five minutes long, and while there are some nods to where the film’s sequel will go… I feel as though some proper explanation would go a long way. Pitch Black is a very grudgy, dirty environment and none of the characters display signs of the super-advanced, alien-esque culture that is being revealed here and in Chronicles. Even with this bridge, it is still very jarring to see Riddick in such environments.

The action is excellent, as it should be from Chung’s direction. The choreography is exceptional and you know what’s happening. The characters are still involving, for a thirty minute experience at least, though I wonder if some things were cut short? Some of the editing feels a little clunky and throw-away. 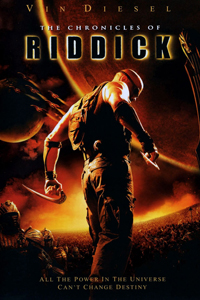 “All the powers in the universe can’t change destiny”, says the tagline. All the ways you can look at this film, doesn’t prevent it from being bad.

The ruthless killer Riddick has escaped the bounty hunters on his trail for five years, but when he is drawn to the planet Helion Prime by an old friend, he is brought into a universe-changing battle. The Necromongers, a brainwashed legion led by a fanatical dictator seeking immortality in what he calls The Underverse, are intent on destroying Helion and all cultures that do not join their army. However, while Riddick attempts to find Jack – the young survivor he rescued – a destiny and lineage finds him.

In this day and age of remakes and lack of imagination, I find it hard to rail so harshly on The Chronicles of Riddick; here is a film full to the brim with creativity and otherworldly concepts. Right from the get go we see the Necromongers and their world-ending technology, right from the start we have Dudi Dench’s “Elemental” giving narration about destiny and fate. Creative costume, set, weapon and ship designs are rife. We are given so much lore, pomp and circumstance that goes way, way, way over our heads instantly.

But what the heck does any of this have to do with a handful of civilians surviving vicious aliens on a barren planet during Pitch Black? Not a darn thing.

Pitch Black is a small, isolated story, and its cult following is due to how it works well with what little it has. TCoR is so bloated with concepts and ideas that were never referenced to, and so completely dwarf the original film’s significance, and that none of what we know about Riddick even matters anymore.
Indeed, Riddick himself feels lost in this story’s heady heights; I almost feel bad for him and this supposed destiny he has been labored with. I suppose they wanted to give him backstory, since he was a mystery, but I personally don’t think this is the backstory he deserved.
Indeed each of the Pitch Black survivors suffer in this film, especially Jack, whose unique perspective of Riddick just boils down to becoming a generic bad-ass. I felt there was a lot missing here, despite watching Dark Fury (if you haven’t, you will find this character’s development even more confusing…) Speaking of Dark Fury, that anime had better action choreography and pacing that this.

What’s worse, TCoR was meant to be the first of three films. This was designed to be a vehicle for Vin Diesel and creator David Twohy to make their mark with. Naturally, this sort of “diving in feet first” approach backfired in the worse possible way, and no follow up was attempted for what is now nine years.

Asides from the costume, set and creative designs, I would say the film’s second act is best, when Riddick is imprisoned once again. It is evident that the character belongs in small, claustrophobic environments, not sprawling vistas with armies of enemies.

I hear there is a Director’s Cut out there, so I should track that down as it apparently explains more about… what the hell is happening and who everyone is.

So yeah, watch if you are a big sci-fi fan, but the CG is pretty bad for nine years ago. Otherwise, just enjoy Pitch Black as a singular, awesome slice of a universe we don’t know. 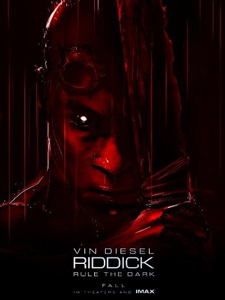 Riddick (2013)A follow up to a disastrous flop made nine years ago, Riddick scales things back to basics in an effort to capture a sense of peril, intensity and horror thrills. But like the big man himself says at the film’s opening: “This ain’t nothin’ new”.

Richard B. Riddick, criminal, murderer, convict, finds himself left for dead on a wasteland world. Alone and wounded he has to survive against creatures that want him dead. The only way to escape is to send a beacon and summon bounty hunters who are looking for him, kill them, and steal their ship. But the planet’s inhabitants aren’t going to make that any easier.

If you saw my Chronicles of Riddick review, you will know I have my issues with this film. Riddick, as a complete package, is a retread of 2000’s Pitch Black, and yes, the older film remains superior to this.
That shouldn’t be a surprise to you. The film has a lot less heart than the older movie; now we have Riddick up against two bands of mercenaries and cutthroats, and while there is a tiny sliver of effort to make us relate to some of them… it is nowhere near enough. They all become cardboard targets for Riddick or the creatures hunting them.
Pitch Black‘s remarkableness is due to Riddick having what is called a “character arc”, something most good characters have in common, and that he wasn’t the only focus in that movie. While the bafflingly titled Riddick attempts the same idea by harking back to the previous events, it is too little too late… and if I’m honest, badly handled.

So far I’m talking about the film’s third act, which is easily the weakest part. The film opens with an unconventional approach as we see Riddick alone and vulnerable, learning survival techniques. Director David Twohy lets us remember the dazing vistas and bleak wastelands of his superior film by replicating them here. It may be a similar, but it is still effective.
There is too an explanation to connect this sequel to the condemned Chronicles of Riddick, which was a blessing (and perplexing, I actually liked seeing the return of the Necromongers) the explanation didn’t sit right with me… and was instantly forgotten about, but at least it was acknowledged.

I still feel bad for the character; I find him much more interesting than Diesel’s Fast and Furious alter ego, yet they still haven’t fully explored what made him interesting at the end of Pitch Black.

This was a decent attempt at recovery, but it just lacks heart and becomes little more than a testosterone fueled chest-beating action fest.

Additional Marshmallows: At the very least, I can respect Diesel showing off his ability to throw people (and aliens) around in this franchise, unlike in a series about car racing!