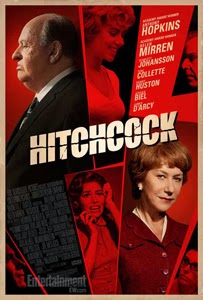 An interesting piece of film trivia packaged with some excellent casting choices.

Hitchcock follows the “master of suspense” Alfred Hitchcock and his wife Alma in the true story of their struggle to produce the classic film Psycho, and how the film was nearly never made.

While I can’t say the film gripped me necessarily, it was certainly well produced and well acted; the set dressing, costume and make-up are very convincing and immerses you in the time period, which I think is the best a film like this can hope to achieve. After all, we know the film Psycho gets made and is a huge success.
I’d say that Anthony Hopkins appearance as Hitchcock is perhaps the weakest in appearance, but that’s only because Hitchcock is a very identifiable man. He does however convey the power, conviction and troubled mind of the man.
Award for best dead ringer goes to James D’arcy as Norman Bates’ actor Anthony Perkins, disturbingly similar!

I guess I knew very little of Hitchcock and the sort of man he was, so this film was both eye opening and a little lukewarm at the same time. We see his wife Alma (Helen Mirren) struggle as her husband becomes possessive towards his beautiful leading lady Janet Leigh (Scarlet Johansson) and I can’t say I even knew about this! So the film focuses almost entirely upon the hardships Alma dealt with being married to such a creative man, and the sacrifices he is prepared to put them through.
My favourite parts were the scenes obviously put in to show the time period of film, specifically the censorship rules. You cannot show a toilet! At all! The film is quite fascinating in these respects.

It is more about the people involved than the film itself. I don’t think I will watch Psycho with any particular added intrigue, more I will watch any Hitchcock film in general with more awareness of the man’s techniques and personality.

I’d say its recommended for film buffs and biopic fans. Most people will probably find it either slow or not particularly special. The casting choices and the production efforts are remarkable though.