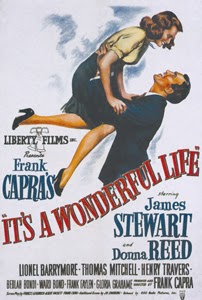 No. Just get it out of your system now, no, I hadn’t seen It’s a Wonderful Life until now. Yes, I should have, what kind of a film reviewer am I? Now let’s move on!

A businessman who is compassionate and kind to everyone around him, intent on running a bank for the people, find himself despairing about what his life has slowly become. But an angel is sent to show the frustrated man what life would have been like for those around him had he never been born.

It is hard to review a classic, especially one that is parodied ever since it came out, but I can safely say that even now I thought it was great!
My usual gripes with older films are entirely how they become dated; I usually withstand a great deal but sometimes they can simply be too saccharine or so stiff that they come across as emotionally dead, but It’s a Wonderful Life doesn’t fall into either category. James Stewart and Donna Reed as the leading roles are excellent, in fact all of the acting here is perfect and you immediately see chemistry between them all. The tone is very light (though not comedic) and this only intensifies what happens later when our protagonist George Bailey’s life turns upside down.

I guess my only grievance with the film is the ages of our actors… The film follows George and his sweetheart Mary from when they are kids, and of course as kids they have child actors, but when George is eighteen/twenty, talking about going to college etc, he’s played by a thirty-eight year old George Stewart! Don’t get me wrong, the two of them act that age incredibly well, they had me fooled for the most part! I guess it is a knit-pick and is unavoidable… but it really is quite obvious.

The film’s strength lies in its second and third act, this is when George’s life peaks and we see how he so desperately wants more but finds his dreams are not obtainable. Our angel, Clarence, arrives on the scene surprisingly late on (you might almost forget that he’s meant to appear, as engrossed as you already were!) and the film’s theme ultimately moves and rejuvenates you even in today’s world, perhaps even more so.

You’d have to have a heart of stone to not feel something while watching this film back, I would hope our society isn’t so cynical that this sort of story would be forgotten about.