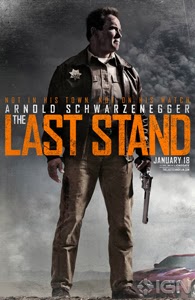 Now sheriff of a lazy, backwater town, Ray Owens (Schwarzenegger) used to be an LA cop and soon finds his old skills required once more when a drug lord makes a prison break for the Mexican border and only his small town stands in the way.

Directed by Kim Jee-Woon (director of The Good, The Bad and the Weird, which I highly recommend by the way! Very oddball) The Last Stand benefits first and foremost from its good sense of humour.
One cannot help but compare to Stallone’s solo reprisal Bullet to the Head that came out this year, and unlike Stallone’s preachy, testosterone fueled medodrama, Schwarzenegger’s film feels a lot more entertaining and ever so slightly self-aware. He only complains that he’s old once. Once! Plus his lines aren’t completely cheesy (he doesn’t even say “I’ll be Back”, in fact he says: “I’ll be right back”, twist!) and my favourite was surely: “You make us immigrants look bad,” with the stony irony only Arnie can deliver.
Strangely, Arnie is teamed up with a bumbling, insecure lot of small town police officers (shades of Simon Pegg and Nick Frost’s Hot Fuzz) who include Johnny Knoxville. Wait, what? Knoxville is zany, but it only makes Arnold’s grim facade more amusing by proxy.

It isn’t the most original of stories. There is a parallel story involving Forest Whitaker’s FBI trying and failing to stop the drug lord’s escape, but it feels a little repetitive and there’s no surprise in the payoff (except possibly the most underplayed “twist” I’ve ever seen). The soundtrack is average, the sound effects are stock, and there’s even a romantic couple thrown in for good measure just to tick all the necessary boxes.

But, for a “welcome back Arnold” vehicle, it is great fun. You can tell he is happy to be back and doing his own thing, with plenty of subtle undertones for an ex-Governor. Recommended for action junkies and (obviously) Arnie fans.

Just… do more of your own thing, Arnold. While I’ve not seen Escape Plan yet, I can safely say The Last Stand is better than The Expendables film (the first one, definitely) it probably helps that Stallone wasn’t directing here.