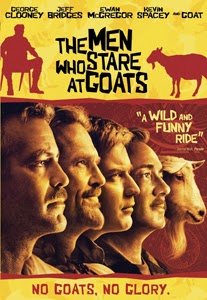 Having just seen The Monuments Men, I opted to find another unorthodox “war film” starring George Clooney. This time though, it was a lot of fun!

Bob Wilton (Ewan McGregor) is a reporter out to prove himself to his cheating girlfriend, and may have found the story to make a name for himself. Lyn Cassady (George Clooney) was once a military officer who was trained in psychic warfare as part of “The New Earth Army”. In following Cassady, Bob must travel to Iraq and discover whether the story is true or utter lunacy.

The film opens with the teasing text: More of this is true than you would believe. That is exactly how this entire film plays out, in a constant state of egging you on, testing how far you can believe a real military organisation would go to win a war.
A lot of the comedy comes from bending your suspension of disbelief, and the deadpan, honest delivery of so much nonsense. The root of the story, for example, is that the American military decide to start researching into psychic powers because the Russians had begun similar tests. Tests the Russians begun because the Americans had attempted it first… which wasn’t the case at all; it was a French hoax. Eventually entire divisions were created and funded for the development of real psychic powers!

Enter Jeff Bridges as Bill Django, a Vietnam veteran who started the project and inspired Lyn to be come a “Warrior Monk”, or “Jedi”, through military practices more closely resembling a hippie movement! Believing they can walk through walls, stare animals to death, being able to remote view distant places and will people into submission.
Bob is unfortunately stranded in wartorn Iraq with Lyn, living with the man’s delusions while trying to discover if any of it is in fact true!

The film is a bizarre, oddball experience but seen through the sane lense of McGregor’s character. Had this film been directed by Terry Gilliam or The Coen Brothers it would have been a surrealist experience, but as it stands it is a comedy simply about the characters. Clooney delivers some great lines, true nonsense yet given with such deadpan sincerity. Bridges, of course, chews the scenery and has a riot as a new age pacifist, and it is hard to restrain the giggles when Ewan McGregor asks, with a straight face, “What is a Jedi warrior?”

I definitely enjoyed it. It isn’t a war film, but it encapsulates a lot of the lunacy and blind convictions that people can have in times of crisis. It is a great example of actors delivering so much humour with such conviction.
It is good fun, full of familiar faces, and far from the norm!