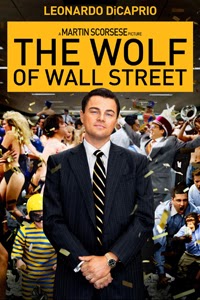 Martin Scorsese’s three hour epic dive into the corrupted, misogynistic and power hungry world of one Jordan Belfort’s career as a wealthy stockbroker.
Jordan Belfort started out with a incurable lust for money, so it was only fitting he should seek a job at Wall Street’s stock market. Only a few days into his time there, after learning the ways of conning and pilfering money through shorthand methods, the Wall Street crash of 1987 occurs. Without a job, Jordan starts his own stockbroker company with a ragtag selection of salesmen.
But with his skills and natural confidence, the company explodes into a riotous, drug-fueled yet successful business, and soon Jordan’s (and his co-workers’) excessive lifestyle begins to shrink the ground beneath his feet.
Martin Scorsese is one of the great directors in modern Hollywood, and his affinity with our lead actor Leonardo DiCaprio here has never appeared stronger. DeCaprio oozes self confidence and roars with egotistical nonsense at every turn, so sincere and compelling that he both disappears into the role and keeps you invested for the film’s entire run time. This confident director/lead actor synergy pours into its supporting cast, Jonah Hill (someone I never really focus on) surprises with every scene he’s in.
The script is almost Tarantino in its brutality and pacing, and this coupled with Scorsese’s very honest directing style, makes the film fly by.
But it isn’t exactly an easy film to watch. Jordan Belmont is a drug and sex addicted warmonger of the financial sector. While you find yourself amused and often sympathetic for his cause, his actions are insane and reckless. The film is crammed with sex, drugs and a litany of misconduct, not for the faint hearted! But the film balances its recklessness with a lot of levity through the unhinged humour of its characters. Midget tossing, anyone?
I guess if I had to dig at something, it is only that the story is relatively straight forward, you won’t be too surprised where the characters’ directions are going, but you will be taken aback by the moments they have. That and the editing seemed off slightly, I would see little inconsistencies between cuts. But, that is me being cynical.
Shock value aplenty here. Highly recommended for the performances of everyone involved, everything else is incredible window dressing of the worst, most indulgent kind.