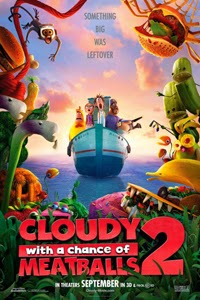 I really enjoyed the first Cloudy movie, and was sad that I never got around to seeing this sequel in the cinema. Now I can say that while it doesn’t quite live up to the quirky original, it is full of some of the most silly, most adorable food animals!

Following on directly from the events of the first film we see inventor Flint Lockwood trying desperately to join a science corporation ran by a childhood idol of his, the same corporation that has stepped in to prevent consequences of Flint’s “water-into-food” device. Namely, an island inhabited by living food!

The trailer had sold this film to me (and the marketing too) by simply showing us all the crazy animals they had designed for the animation! This is easily, easily the films best quality and quite possibly the only reason it exists at all. Watermelophants? Hippopotatoes? Shrimpanzees? And quite possibly the most adorable marshmallows I have ever seen, I want one. Or several.

This design work is very straightforward but it is so enjoyable to watch, much like with the first film, and the animation work is rubbery and looney. Our characters move and behave more like squeezy toys than attempting to look “real”. I think this is a benefit to the film since we have so many animated films attempting to be realistic or slick and stylish; this is just off the rails, like an old Saturday morning cartoon.

So style and design are top notch, but where the film flounders a bit is the story it attempts to provide. The first film was simple: a disaster movie with gigantic portions of food. Cloudy 2 attempts to be more like a dinosaur movie, The Lost World style, with some moral implications and betrayal. Unless you are two years old I doubt any of the “surprises” will provide such excitement. The villain isn’t particularly good or inspiring, the plot just moves along with all the classic cliche that we come to expect.
Another thing I need to add would be, despite the animation on the characters being fun and lively, the backgrounds were seemingly dead, often flat and devoid of eye catching details. I cannot remember if the first film had this too and this is merely a style choice, but asides some of the final scenes, the backgrounds didn’t get much love?
The humour is great but mostly in an eye rolling “oh god did they actually go there?” manner; the puns are set to overdrive in this film, in fact I think half of the first act’s script is entirely puns-for-puns’ sake!

If it weren’t for the goofy and wonderful critters, I would rather watch the first film again. But this isn’t bad either! If you enjoyed the first film, like I did, you’ll enjoy this too. Just watch it for the cute animals.