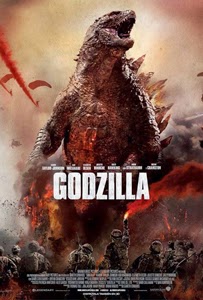 I didn’t like my first attempt at reviewing Gareth Edwards’ Godzilla, it was too much of a rant for my tastes, so I took the time to watch the film again. It really has been 2014’s most divisive film yet and I wanted to be sure of my original opinion (You can’t say I’m not fair!) But, despite a bit more forgiveness this time, I still find it to be a poorly executed film.

Doctor Serizawa (Ken Watanabe) has been following an ancient parasitic organism and tracked it down to a nuclear plant explosion in Japan. He finds one of the physicists there to have information he needs on the creature (known as a MUTO) but as the creature hatches and causes global destruction, Serizawa believes the military is not enough… and that an equally ancient creature is their only hope…

Now I’d like to stress, first and foremost (and despite my first ranting review) this is not a bad film, it is simply very easy and very necessary to view the many problems it has. I like the film’s audacity: in a time were big monster/robot movies are light or popcorn munching flicks (Transformers, Pacific Rim etc) this Godzilla attempts to merge what is a very rich legacy of films. On the one hand, we have the original 1954 film, for its time it is an edgy, morose and compelling blockbuster, but on the other hand we have the ridiculous and often laughed at monster battle movies that Toho Studios are famous for.
Here, Gareth Edwards appears to be wanting both. An atmospheric, realistic (and almost philosophical) monster battle movie. We don’t just get Godzilla, we have other monsters for him to fight, as well as human interests to follow! That is a big ask, for a film just two hours long, and I do respect the attempt.

The film looks great; there are some proper moments that are very cool and give a great sense of awe and enormity (Godzilla is staggeringly huge in this rendition) the marine “halo jump” scene is an intense sequence. I like the monsters as well, both traditional and new. The music too, upon the second viewing, is great! Going from low, trembling fear to bombastic chaos in a heartbeat.

But… (and it is a big, Godzilla-sized but) the storytelling, premise, motivations and character arcs are absolute garbage.
I honestly have trouble understanding people saying this has better character motivation and emotion than say the aforementioned Pacific Rim or Transformers. This film is choked with some of the most unnecessary blockbuster cliches. “Oh no, mass destruction of a major city, BUT WILL THE DOG SURVIVE!?”
There are some terrible oversights in logic also, making the military depicted appear completely incapable of rational thought, while the characters themselves work off an asinine script (something Gareth Edwards “claim to fame” Monsters also suffered from, a terrible script) All of this makes the human subplot, or should I say main plot, appear confused and redundant.
Ugh, to stop a rant from developing again I will move on.

Bryan Cranston from Breaking Bad features heavily in the film’s trailers, yet his part has almost zero bearing on the film’s story. Don’t believe me? Watch it again. You could cut him out from the story completely. He should have been the focus of the film; he gave the most impassioned performance, but no, we follow instead his son, Aaron Taylor-Johnson’s Ford, a cardboard soldier who is forever under the feet of these monsters regardless of which country he’s in. I know Aaron Taylor can act, I liked Kick-Ass, but here both the script (and mostly likely the director) gave him nothing to work with.
A cynic could say, and I do, that Bryan Cranston’s involvement was merely to boost ticket sales.

It is a difficult film to like; I can see a lot of it working (a sequel as a lot of potential for improvement) but it becomes so frustrating over time and two hours starts to stretch on for eternity. The monster fights climax wonderfully, but with literally one hundred minutes of build up, either with teeth-grindingly tedious character fluff, or continuously teasing grand battles with merciless edits and cut-aways (dare I say this is as bad as Cloverfield) the entire experience becomes a frustrating endurance of nothing.

I don’t see why we needed a first act that is nearly pointless. Cranston’s character could have been cut and replaced with more of Ken Watanabe’s character giving Godzilla (you know, the titular character!) an actual backstory. We have an audience who believes the Roland Emmerich 1998 Godzilla is “the original”! That is blasphemous; Japan and Toho actively distance themselves from that film. This was the opportunity to tell western audiences about Godzilla… and the film fails to do that.