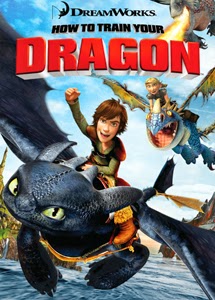 2010 was a tough, tough year to rate films; so many excellent films, it remains the most memorable year for me. Inception won out, but even with Tron Legacy and Toy Story 3, How to Train your Dragon came a very, very tight second behind Christopher Nolan’s mind-warping thriller. Even now… I question that choice: in my top 50 films of all, this film comes a solid 18th (one place higher than Inception).

I adore this movie.

In a fantastical land, warrior vikings battle dragons on a daily basis, but one viking Hiccup is not like the others; he is meek and sheltered and instead of battling he creates traps and gadgets, instantly becoming a laughing stock of his peers and a disgrace to his father. But when Hiccup wounds a mysterious new dragon and begins to form a friendship with the beast, his world is turned (sometimes literally) upside down!

I remember the early posters for this film. I remember scoffing: “Hmpf, How to Train your Dragon? Another lame animation full of crude humour from the studio that brought us Shrek? Count me out.” But then the trailer appeared and wow. Then I watched it and I was floored.
For a ninety minute feature it is crammed with story and great characterization! The dialogue first and foremost is witty and snappy but never overbearing or obnoxious (something a lot of animation suffers from at least a couple of times) this comes from having genuinely wonderful characters. Hiccup (voiced by Jay Baruchel, probably now typecast for life) is not whiny or too hopeless, using intellect and unorthadox thinking to win out, and the film’s core being the developing friendship between him and his dragon Toothless, which is both very powerful and fun to watch! I don’t think I can forget their first scenes together on screen!
Toothless, what can one say? Media has had a lot of great dragons in the past, Toothless is right up with the best of them! Somewhere between a dragon and a cat, his is intensely cute and fiercely loyal to Hiccup. They become like joshing best buddies.
It doesn’t stop there either, the supporting cast are excellent too. Gerald Butler gives a fantastic performance as Hiccup’s father, the amazingly named Stoic the Vast (the father-and-son “talk” scene is actually one of my favourites) and even potential love interest Astrid (America Ferrera) isn’t anywhere near two-dimensional.

It isn’t all fluffy cuteness either, the overarching story is intense; these vikings live to hunt and kill dragons, this is a war going on and at times How to Train Your Dragon does not pull any punches. There are some challenging, heart wrenching moments in the third act, and as such this film single-handed showed the world that Dreamworks Studios are capable of standing as tall (if not taller) than Disney and Pixar combined.

The music is a soaring Celtic and orchestral mix, the graphics are often eye-popping (the sky and rock effects are incredible) and the animation on Toothless is to die for, the screenplay is tight and never wasteful and the dialogue is smart and refined.

Dare I say it, nothing is wrong with this film!

Additional Marshmallows: If you haven’t already, I recommend you find the How to Train Your Dragon short animations, they are great additions to the world and provide even more wonderful character dialogue!
Advertisement