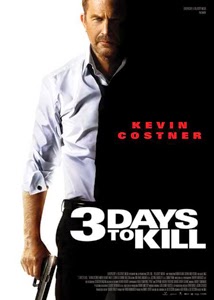 Three days to have awkward conversations.

Kevin Costner plays Ethan, a CIA agent thirty-two years in the job and alienated from his young daughter and wife because of it. His life becomes worse when cancer ends his career, but the CIA ask him to complete one last job in exchange for an experimental drug to prolong his life.

This film is utter nonsense.

I know exactly where to start my criticism: “Based on a story by Luc Besson”, oh you mean like based on Taken, a film written by Luc Besson. A film vastly superior to this one in every way imaginable?
I can see were Besson’s influence exists here, but director McG hasn’t a clue how to execute any of it and what we get is a parody of a Besson film with an identity crisis.

At its best 3 Days to Kill is a cliche action movie with the classic scenarios in the first and final acts. Costner is roped into the story because he “may have seen the villain of the story before”, possibly the loosest reason I’ve heard in a long while, and naturally the story concludes exactly as it should: this is a 12A after all, it is child friendly.

But the second act, what can we fill it with? Exciting car chases, interrogations, memorable lines (ie everything Taken provided) no, no… we get possibly the weirdest most passionless comedy show on Earth. Everyone (and I mean everyone) knows by now Costner is not one for charisma. I’m sorry, all five of his fans out there but the entire middle of this film is utterly tedious and insanely repetitive.
Want action scenes? How about a father/daughter debate about girls’ hairstyles? No? How about an argument about moustaches versus goatees, or how yellow isn’t a man’s colour, or which is considered “real Football” from a French or American standpoint. Good lord, the script pushes the boat out for asinine conversations. I know the film is trying to be funny (to its potential benefit: some distance from Taken is a good thing) but it fails so completely that I just feel bad for it.

Oh did I mention the editing was terrible too? To think I forgave McG for Terminator: Salvation, the man has no sense of timing or pacing.

You know, from the beginning I had some hope it might improve and I stuck it out… but no one can endure so much repetition and cliche. Just watch Taken again, seriously. I cynically thought this was Costner’s agent saying to him: “Hey, it worked for Neeson!” and… that’s exactly what tried to happen here.
The key word being tried.