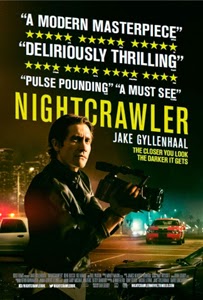 Nightcrawler is one of those films that does so much with so little; a meticulous escalation of one character’s desires coupled with a rich subtext of media’s rotten underbelly.

Louis Bloom is a nobody. He has no friends, no close family and zero empathy for others. His shallow attempts to give his life meaning begin by stealing and selling to a buyer only to simultaneously ask for a job.
But upon seeing a near-fatal car accident one night, he sees the potential as a freelance cameraman; his lack of compassion fitting the need to get in close on grisly accident and crime scenes. But when his lawless approach to reporting gets the attention of a sensationalist News network boss, his cravings escalate to dangerous levels.

I am late in seeing this movie, and as many reviewers have already made clear: Jake Gyllenhaal dominates this movie, taking centre stage and making it work seamlessly, his anti-hero persona as Bloom is captivating. He is lost within this character he has created: little personal ticks, how haunted yet enlivened he appears. Bloom is a psychotic with no passion beyond that of a textbook; his conversations with others rattle with business cliches and management hyperbole to the point were one sniggers, yet Gyllenhaal delivers it all with suitable conviction making it all the more real. We are told next to nothing about Bloom’s past, we can only take him on his word.

The film is a murky and often quiet experience, relying heavily on Gyllenhaal’s performance to carry much of the film’s storytelling. This is a character piece, the film isn’t a jumble of subplots and exposition, no flashbacks or flashforwards. We see Bloom begin with absolutely nothing, and watch him connive and sneak his way to success by filming the aftermaths of ghastly accidents and crimes.
Sounds a little like DiCaprio’s Belfort in Wolf of Wall Street, though unlike that film Nightcrawler is beautifully paced and edited without repetition. Coupled that film’s ability to make the audience sympathise and even empathise with such a crazed anti-hero with the style of Drive, I honestly have a hard time thinking of anything inherently wrong with Nightcrawler…

The characters are all generally unlikeable people, deliberately so. Gyllenhaal is the poster boy of snide and calculating, but Rene Russo’s Nina, his employer, is equally as deprived by fuelling this man’s unhealthy and unjust methods. Bill Paxton is a fellow “nightcrawler” and provides Bloom’s competition. The only heart that is still beating is in Bloom’s “assistant” Rick (Riz Ahmed) a man so desperate for work that he cannot turn Bloom’s insane ideas down.
Some people have issue with films that lack the more traditional, conventional themes and characters, and Nightcrawler is an unconventional look at sensationalist News coverage in the worst light possible. I cannot imagine everyone “enjoying” it, but I would hope audiences can at least appreciate how effective it is at delivering its subtext.

As unconventional as it is, it is excellently made and wonderfully well paced, and this reviewer can find little wrong with it!