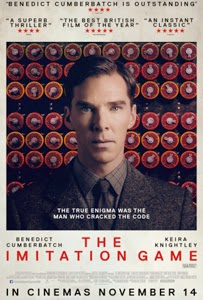 A compelling piece of history and a story worth telling, Cumberbatch is excellent but I felt the experience was let down by a very “convenient” screenplay.

Based off the book “Alan Turing: The Enigma” based off the true story of the mathematician who broke the infamous Nazi cypher machine known as The Enigma Machine in World War 2. Benedict Cumberbatch in  the leading role and Keira Knightley and Charles Dance co-starring.

The knowledge of Turing’s involvement, the existence of his code-cracking machine and its pivotal role in the success against the Nazis were kept secret for fifty years, making both the film and the book it is based upon incredibly insightful and important.
The title refers to Turing’s complex machine, the first ever computer, and his desire to create an imitation of a human’s brain, a thought provoking piece of history in today’s heavily computerised society.

But the film isn’t all about computers and code breakers, it is more about Turing himself, and Cumberbatch brings everything to the performance and creates a very complex and convincing character. Turing is an awkward yet vastly intelligent, egotistical to a point, and frail man who has constant battles of will with everyone between him and his own goals. He and Charles Dance have a great aggression going on here, Dance as the military commander Denniston and much like a unrelenting schoolmaster with the younger mathematicians under his sway. Convincing anyone to believe in his machine is only half of Turing’s battle, his homosexuality in 1940s society ready to ruin his life and career should anyone discover it.

The Imitation Game is a good historical drama and a great biopic, but I wouldn’t say it was a successful “thriller” or as complex as it maybe should have been. The story being told in flashback isn’t a problem, in fact I welcomed it as it kept the pacing fluid, but the screenplay itself felt very shorthand. Characters sometimes have wild changes of heart between scenes, especially Matthew Goode’s character Hugh who acts as Turing’s rival code breaker at first but for little reason suddenly backs him at the crisis point, along with everyone else, “I am Spartacus” style.

But it did what good historical dramas can do, it taught me something and was compelling enough to not become laborious. It starts off quite awkwardly (oh look, it is Tywin Lannister arguing with Sherlock Holmes) and continues to be a little familiar, but it takes to the skies in the third act with the real themes of the movie coming to fruition. All of my mild cynicism had melted away by the film’s conclusion.

Well worth a watch, maybe not cinema-worthy but definitely a rental; very well acted, well paced and it is an important story to be sure. Just forgive some debatable characterisation and shorthand script work here and there.