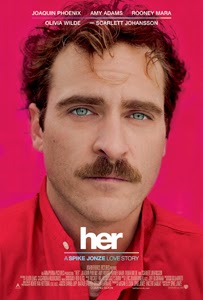 It is great to see Joaquin Phoenix back, and it is even better to see him deliver one of his best performances in a very honest, clever love story.

Unable to commit to signing his devoice papers, a writer seeks companionship after breaking up with his wife through a new computer system with advanced artificial intelligence.

I am not one for watching romantic dramas, or rom-coms, or frankly any film that revolves solely around a relationship triangle… I find them often trite and predictable.
But occasionally one comes along that isn’t trite, that prefers to be quirky or beautifully honest with what it is talking about. Love can be a mushy and gaudy subject on film, but I am happy to say that Spike Jonze’s Her is subtle, downplayed and dives into many different aspects of a relationship.

The premise sounds goofy, and at times it is deliberately seen as a perplexing idea. A man dates a computer? Really?

But the metaphor is solid. Samantha (the name the operating system OS1 gave herself upon being asked) is represented by voice only, played by Scarlett Johansson, and here’s where, for me, the honesty comes into play.
Our protagonist, Theodore, is lonely and wants physical connection with someone. But as the story progresses he sees that simply having someone to talk to, to share things with and someone to listen to is all he needs.

Of course, there’s a lot more going on than just that. The film feels like a narrow slice, a cross-section of a much larger futurescape that Spike Jonze has written; we see technology from a very hands-on and domestic perspective that might not be that far from reality.
When considered in this way, Theodore’s relationship is unexpected but completely believable in the film’s setting and, more importantly, our future.

It is an incredibly simple and honest story about what can happen during relationships, but with an almost contemporary science fiction quirk driving it along. You can see why it won the Academy Award for Original Screenplay.

I recommend it for a quiet, thoughtful, loving and often morose experience one evening.