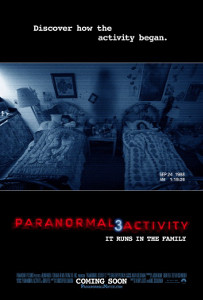 The best scares were the movie’s characters pulling pranks on one another.

With Paranormal Activity 2 following the events of the first film, it is only logical in the studio’s mind to crank out a prequel for the third part. We see Katie from the first film as a child, and witness the start of her demonic experiences through the eyes of a skeptical mother and a camera wielding step-father.

Maybe I will reconsider it if I watch it again, but Paranormal Activity was excellent in my opinion, I even wrote a post about how I felt its fixed camera gimmick was clever in forcing the viewer to keep watching. Other critics disagreed, and what we have now is exactly what those critics said: protracted silent moments of waiting for household objects to move.

It took a miserable five minutes before I was demanding this guy put his camera down just once (what a gent: filming two women carry boxes into the basement instead of helping out) I was honestly surprised when he didn’t rescue the camera during an “earthquake”. Even during family trauma (potentially aggravated by having cameras everywhere) his response to being asked to put the camera down: “No, it’s okay, I feel like I need to be useful”.

There are no scares here. Everything is so framed and set up scene-by-scene that only a total idiot wouldn’t see the supposed jumps coming, even the slower atmospheric moments are by the numbers: oh, block our vision will you? I guess someone will be behind him when we can see again? Yup, hi there. Oh, block our vision again? That shadowy someone is gone again? Yup.
Possibly one of the best sequences involves the Bloody Mary chant at a mirror. Wow, I know this is set in 1988 but that scare is really, really old.

By all appearances this film is trying to mimic the first (random sleep-walking time lapse footage) and it tries to pull off the same shock ending, but has to magic away four characters to do the whole “alone in a house” routine.

Generally speaking film franchises are supposed to get more extreme as they go (the Saw movies got increasingly gorier, for example) but here it feels like less happens, at least in terms of scares and in terms of explaining anything. “Discover how the activity began” boasts the tagline. Really? I certainly saw things occur, but I have no idea how any of it began.

The first film had me on the edge of my seat for the last twenty minutes, the second one wasn’t as successful but felt like a decent sequel, this one just feels wasted; boring cliches replacing potential story building. But then that would be suggesting these writers could write a story.