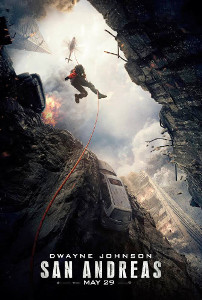 A distinctly average natural disaster movie, mostly notable for its special effects. But then, what movie in this genre isn’t? Dwayne “The Rock” Johnson is Ray, a rescue helicopter pilot about to experience the worst earthquake in history across the San Andreas fault. It is a race against time and endurance for him to rescue his family from constant chaos.

So I went to see San Andreas mostly because these movies require big screen viewing; they lose even more when watched on a television. Disaster movies are prone to cliche, so I wanted to give it a good shot. But this is full of disaster cliche, and some pretty questionable moments between characters. So we open with a rescue scenario that seems to suggest the problem would have been solved if all three helicopter operators were Dwayne Johnson; since he is best at doing everything and as soon as other trained men do tasks they fail miserably.
A following scene shows his bikini-clad daughter, but more importantly how Ray’s marriage is ending; his wife is now going out with a slimy, shifty-eyed architect who considers his buildings more important than children. You can probably guess everything that happens between these four characters. The chaos that ensues follows Ray’s family after they are divided over the region, and it is up to him to personally rescue them (and no one else) with Government funded equipment.

Meanwhile Paul Giamatti is a seismologist who gives us a “very scientific” commentary of what is happening, it goes something like this: “This is a 6.5 on the scale!”; “This is a 9.6 on the scale!”; “Get under the table!” and gets regularly told by others to “Come and look at this!” These moments seem pointless.

But the action, which is why we are here, is excellent, and I am one of those people who really enjoys Dwayne Johnson’s personas in movies. Even in terrible films he always seems like he is having a great time and is incredibly likable as an actor and as a human being! So I find it easy to sympathise with his character in this film. Despite how contrived things can get.

Okay you might want and example? ***spoilers***:
Ray’s wife is going out with an architect who cares more about his buildings than human beings and he is incredibly proud of them. They are both moving in together. Ray’s daughter spends time with him and learns about a new, “incredibly stable”, building he has recently built. Naturally she is forced to go to this building in the film’s climax.
Ray and his wife are struggling to find her now, but they know she will be in one of many buildings… one of which is the architect’s. The wife doesn’t even bat an eye at it, she doesn’t even consider it highly likely her daughter would A: know the building and/or B: remember her new boyfriend’s raving about it being super stable and structurally sound?
All for a moment of tension that lasts about thirty seconds.

Regardless ***spoilers over*** It is a middle of the road disaster movie. It does nothing to reinvigorate the genre or do anything new, but it looks very impressive and Dwayne Johnson is on top form.