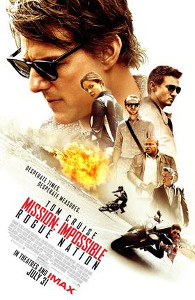 Mission: Impossible – Rogue Nation proves to be both an exciting action movie and a Bond-esque intelligent thriller at the same time. Thoroughly enjoyed myself!

The IMF squad is dissolved into the CIA in the wake of their cowboy, reckless antics that have laid waste to public and private property whenever they are involved. But Ethan Hunt remains vigilant in tracking down “The Syndicate”, a shadow organisation of assassins and terrorists responsible for hundreds of deaths across the globe as part of an intelligence stranglehold operation.

I very much enjoyed Brad Bird’s live action debut film M:I4 Ghost Protocol and from the outset of Rogue Nation‘s glitzy trailer I had my doubts it would live up to the anticipation. But I was wrong. Happily wrong.
The cast return, Tom Cruise in the leading role and still denying he is fifty-three, Jeremy Renner, Simon Pegg and even Ving Rhames returns in a more central role (the only other beside Cruise who was in the original 1996 film) and they all carry on their roles from Ghost Protocol very well. There’s a good sense of chemistry between them and a lot of good humour to give levity to the film’s intensity. Renner playing the doubtful operative William Brandt who gives voice to the audiences own doubt about Hunt’s sanity.

Indeed, with the IMF’s integrity in doubt and Hunt being at the centre, the film’s focus on throwing hesitation into the mix of action sequences add to the tension; the tension building from betrayals and espionage. This film involves several organisations working to outwit one another, and the audience being unsure of the motivation of the heroes is great to mix in! Writer/Director Christopher McQuarrie also wrote Bryan Singer’s twist centric thriller The Usual Suspects.
As with a lot of the M:I films, the villain is somewhat underplayed in favour for the heroes centre stage of the action, but the relatively unknown Sean Harris plays a shadowy power-player extremely well. Perhaps more impressively is newcomer Rebecca Ferguson who plays Ilsa Faust, the best interpretation of a Bond girl put to film! I was afraid, from the trailer’s over-glamourisation of the film, she was going to be objectified to no end and despite holding her own she would need rescuing. Not so! The part is played and written very well.

And of course, the action is great. While I still feel the franchise peaked at Ghost Protocol‘s terrifying Burj Khalifa skyscraper climb and nothing in Rogue Nation can come close to that achievement, this film does have one of the coolest, fastest and most exciting motorbike chases I’ve seen in a very long time! About time someone filmed superbike racing properly!

I am hard pressed to decide which film is better, Ghost Protocol, Rogue Nation or the original film, it is that high in my appreciation. I would say I felt the espionage and thriller aspect of this film to be more intense; the film actually dares to reduce the action for its finale in preference for a shadowy foot chase, and this may have one of the franchise’s best female leads.