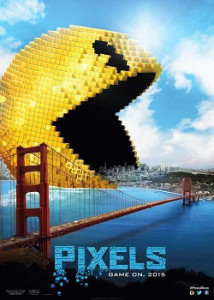 On the surface, this doesn’t look bad, but as a comedy it just isn’t funny and is a black mark to geek culture.

After a probe carrying a video message expressing Human culture is taken as a challenge from alien life, a trio of 1980s gamer nerds become the only hope for Earth’s survival.

If you haven’t been aware, Pixels has been globally destroyed by critics having released in America earlier. Now it has reached the United Kingdom and honestly, I couldn’t fathom the hatred being leveled at it; sure, the trailer looks dumb but nothing to get frustrated about. But I have to admit I can see why.

At the turn of the millennium the appreciation of geek culture has skyrocketed, especially in the film industry what with Marvel’s dominance of the box office, regardless of which studio produced the movies. If Pixels is to be regarded in any broad sense, it can be seen as the first step of overconfidence for geek culture.
Of course, Marvel is comic books, Pixels is loosely based off numerous video game characters such as Donkey Kong (from the original Jump Man game) Centipede, Pac-Man and Q-Bert, and let’s face it, video game adaptations when they are actually based off a game with narrative, seldom work in Hollywood!

Pixels is not based off these much loved characters, but contains them. This film is about Adam Sandler, a drop out loser who’s only skills rely on arcade game sticks and buttons (he is “Second best in The World” apparently) now living the life of a house-call tech repairman. Who has a direct line to the White House Oval Office as his best friend is The President of the United States (played by Kevin James, of Paul Blart: Mall Cop fame…)
Now if you can get through this opening without asking (with cynical realism) why he can’t be gifted a better job by his best friend The President, you still have to get through Sandler’s character depicted as a moron without social skills hitting on a woman, in her own home, who he doesn’t know, after her husband leaves her. And of course they hook up by the end (spoilers).

To say Pixels does more harm than good to the blooming geek culture is an understatement. If this scenario actually happened, the aliens are screwed. We are more invested these days in video games today than we have ever been, we hold tournaments worth millions, it is an industry that is slowly matching the film industry in influence. To see this film blatantly ignoring this fact, trapping its characters in some backward 80s society where geeks are repressed and incompetent human beings is completely baffling.

So yes, I understand the hatred being directed at this film on personal levels.

But the rest of the film, the action sequences and everything not-Sandler, it is noisy but very colourful. I find myself asking questions like: “Why is this not-genuine-80s video game buxom blonde warrior woman now a good guy?”; “Why is Pac-Man the villain and the ghosts are good guys, when every other game interpretation has our heroes play the hero?”; “How did they have Mini Coopers set up in advance without knowing Pac Man would be invading?”; “Why does Q-Bert speak English when his thing is to not speak English?”
Y’know, relevant, life changing questions…
Also, why are Brian Cox and Sean Bean in this film? Come on guys, you are better than this!Possibly the only shining light in this film is Game of Thrones star Peter Dinklage, who appears to have accepted the nonsense he is in and is hamming it up endlessly. Reminds me of Jeremy Irons in Dungeons and Dragons.

Oh, and Tetris blocks destroying a building, that looked cool and made me chuckle.

But everything else falls very badly to the wayside. The jokes are not written well, there are barely any punchlines and actors, especially Josh Gad, apparently thought “SHOUTING = funny” and perhaps one of the worst British stereotypes. I’m sure it’ll entertain children though, this… 12A film with bad language and sexual references.

Additional Marshmallows: I’ve never walked out of a film, but this film coupled with the teeny-bopper girls kicking my seat in my absurdly busy screening, almost convinced me to.

Additional, additional Marshmallows: Watching the pudgy Kevin James physically attempt to play Jump Man is embarrassing, considering he doesn’t jump any barrels, preferring to waddle to one side of the ladders and let the barrels roll past.

Additional Marshamallows: WHY was there a random guy with a computer for a brain??