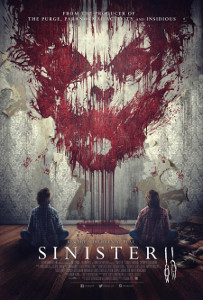 James Ransone returns from the original film for this follow up story detailing more of the horror film’s lore and villain; the Ghoul.

The police deputy who was aware of the horrors that befell the Oswalt family years before has become dedicated to stopping the malicious spirit that destroys whole families. His search leads to a woman on the run from her abusive husband, who hides out in an abandoned country house with her two young boys. Unfortunately, this house was once a site of one of the spirit’s killing sprees…

I enjoyed the original Sinister, it did what it well; creating a grungy, visually dilapidated experience with plenty of scares and a creepy, original monster. But a sequel does feel unnecessary and it could never live up to the predecessor.

I will attempt to not spoil either film, but I recommend them both for horror fans. Sinister 2 (for those who have watched the first film, can read between the lines) follows the same sort of story line only we are viewing from the children’s perspective. This makes the sequel lean far heavier towards the supernatural and attempts to explain the mystery of the Ghoul (aka the demon Bhughul, a sort of bogeyman).
As far as the implementation of this, the film more or less succeeds; it is suitably scary and the film’s final chase sequence actually explained a lot of the Sinister films’ main issue.

The film itself, I enjoyed it, and I actually found myself taken by surprise by more than a few of the jump scares; something very few horrors manage nowadays because horror cinematography has become predictable over the years. So Sinister 2 actually had me jumping in my seat a couple of times, and like its predecessor when it does tension it does it well.

Some, at least. Sinister 2 isn’t without its flaws and upon inspection it really isn’t a patch on the first film. I thoroughly enjoyed Sinister’s investigative nature; a writer driven by his career putting his family in paranormal danger, giving a need to watch the series of murders captured on super-8 camera film. It was simple.
But Sinister 2 requires more conveniences to drive its plot along and makes the supernatural the forefront rather than hidden in the shadows. Its second act is mired with subplots that don’t feel genuine but more like a means to an end. Especially when mother of two Courtney’s husband returns to the film. I’d even say that the super-8 films here are not as terrifying as in the first film; they are gory yes, but somewhat more structured than the grungy aesthetic would invoke.
The characters feel quite distanced too, I didn’t feel much for any of them, although lead star James Ransone takes a comic relief character and turns it into a sort of Bruce Campbell’s Ash from Evil Dead competency, which was quite fun.

I was suitably scared during Sinister 2, but I would say it feels unnecessary despite its best attempts to feel relevant. Sinister works as a perfect standalone film.

Additional Marshmallows: James Ransone’s character had the name of “Deputy” in the first film, and even on Sinister 2’s IMDB he is called “Ex-Deputy So-and-So”.

Additional, additional marshmallows: At least the Deputy knows how to use a torch in the dark unlike Ethan Hawke’s Ellison Oswalt.