The Hitman franchise always seemed like an odd choice to be turned into a film franchise; a dark, moody third-person stealth assassin game where you play as an unstoppable killer. The game came to be from Eidos Interactive, a British games company which later became part of Square Enix Europe after the software giant purchased the company. But Hitman was one of their most successful game franchises with eight titles in the last fifteen years.

Anyone outside of the games industry would still find making not one film but also a remake of that film with this franchise a strange choice, especially when video game franchises like Max Payne and Prince of Persia only get one entry so far.

What is interesting is that both the 2007 entry and the 2015 are both directed by relative newcomers and written by the same writer.

It is a perfect opportunity for a Cinema Cocoa Remake Rumble Review! 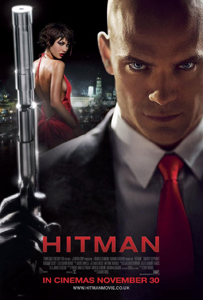 Hitman in 2007 is director Xavier Gens’ only notable feature film, and while half of this film gives plenty of evidence why, the other half isn’t that bad.

A covert group known as The Organisation trains an army of lethal assassins known as Agents, but when Agent 47 discovers one of his targets, a powerful Russian politician, survived his attack he becomes a target. With Interpol tracking him down, 47 has to finish the job he started.

This film is a conflict of emotions for me. On the one hand, it has a terrible plot, ambiguous backstory spontaneous action sequences, but on the other hand it is a decent video game movie adaptation with good action and is impressively gory. For every good moment there’s another bad one to balance the film’s overall neutrality.

Perhaps the most glaringly annoying aspects include lead star Timothy Olyphant as Agent 47, and the script given to him. He just doesn’t look like a stone-cold killer; he appears to soft and bright eyed throughout the film, you cannot believe this guy has been raised to be the ultimate killer. He’s more like someone pretending to be Agent 47. The other major issue with this film is its opening: a flashback style sequence while Ave Maria plays showing us the orphan kids in training to become Agents, only for some of them to attempt escape.
This isn’t referenced again, and 47’s relationship with The Organisation seems ambiguous at best in context with this opening, and add to that how the Agents in the video game weren’t orphans but in fact clones. I couldn’t shake the feeling I had seen this opening before… From the last time I watched this film, right?
Nope. It is footage straight from James Cameron’s television show Dark Angel (2000). They even cite their use of the footage at the end of the film’s credits.

Wow. Wow… Not only is your film’s protagonist’s backstory incorrect to the source material, but the backstory you decided to give is just ripped from something else?

I should condemn this film just for that.

So what could possibly balance this out? Well, it is actually refreshing to watch an action film (an action film based off a video game, no less) that actually has gore and blood squibs used in it! This film includes an action sequence that almost equals some RoboCop (1987) in terms of number of squibs used, its insanely violent. It was wisely rated R and a 15 in the United Kingdom.
Plus there’s some nice nods to the game. Agent 47 walking through corridors while the director has the camera tracking behind and above him, like a game’s third-person perspective, or Agent 47 breaking into a house to find people playing the Hitman video game. Existential crisis there.

It is a bit of a mess. The film feels uninterested in its own plot, focusing on Agent 47 and his lack of heart for female lead Nika (played by Olga Kurylenko) who is quite annoying, reminding me of Transporter 3’s female “lead”. She didn’t seem necessary, as if she could have been written out of the plot.

It is an incredibly throw-away action movie, but in terms of video game adaptations, it wasn’t awful.

This is a remake nobody asked for, and will likely be forgotten about like its predecessor, but honestly they did alright with this remake of the popular video game.

After his project of manufacturing perfect assassins is destroyed, a scientist goes on the run and now only his daughter could possibly know where he is. She is tracked and hunted down by a mysterious, ruthless assassin known only as Agent 47, a product of her father’s work, and a new organisation called The Syndicate.
The main issue I always had with the original Hitman movie was the script and portrayal of Agent 47; Timothy Olyphant didn’t look like a genuinely ruthless and methodical killer. In this film, Rupert Friend (of Homeland fame) takes up the role of 47 and he gives a far more genuine performance, even channelling some of The Terminator earlier on; walking, not running, and forever on the heels of our heroine, Katia (Hannah Ware) and her initial protector John (Zachary Quinto) combined with the slick surroundings and Agent 47’s impeccable suit.

It is rewarding to see the assassin be a threat, and while the video game has him as the protagonist I feel a film needs to establish this man as a cold, emotionless killer, and the film opens with this perfectly. Also Katia’s character is a fair few steps ahead of Nika from the original film, in that she is actually integral to the story and she progresses the plot! Agent 47 is more like a means to an end in this film, and other characters supply the story, which is how it should be.

The story progresses neatly enough, hitting all the traditional marks of an action, chase thriller with some neat little twists in there to keep you intrigued. Although there are some moments that defy belief: the police officer interrogating Agent 47 while having a sniper rifle and ammunition in the room… or some quite incredible technology that is only experimental today that will raise some eyebrows.
But these are small issues compared to the general lack of tone from the original film.

I will say though, contradicting the sleek styling the film has, the combat sequences were fairly messy with an abundance of shaky-cam. I thought we were through with this? Hitman would have benefitted more paced, methodical combat instead of frenetic chaos. On the plus side there was still buckets of gore, Hitman incredibly maintaining its 15 certificate and R rating!

While the film is a fairly by the numbers chase film, and it loses a little bit of traction towards the end with its mysterious antagonist, I enjoyed it a fair bit! It had decent acting for a video game movie, the action was decent and the character felt well portrayed.

Additional Marshmallows: Incredibly Hitman: Agent 47 is director Aleksander Bach’s debut and also solo career entry on IMDB! Whether he has done more and the site has not been updated, I cannot say, but for a debut director, Agent 47 is something to be proud of!