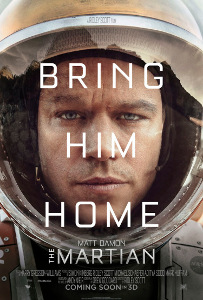 Matt Damon plays Mark Watney, an astronaut botanist who takes part in a space mission to the planet Mars, but when their mission is cut drastically short due to a storm, the team lose him and presume him dead. With the crew returning back to Earth, Mark wakes alone on the red planet with what little supplies the team had left in their hurried exodus. Now survival is his number one priority, with the dizzying prospect of years of waiting for Earth to send help.

The film opens with a bang (after a moody title sequence very reminiscent of Scott’s Alien classic) with our Mars team settled on the planet only to be ripped away from it in their escape from the storm, all within ten minutes maximum. This opening is far too rushed; we have a half dozen characters and virtually no chemistry or personality to accompany the dangers they are faced. None until the meat of the story commences: Damon’s Mark Watney wakes up and makes the NASA base his home.
Luckily for us, Matt Damon delivers an intensely likable performance that balances the long scenes of dialogue-free survivalist drama as he builds a crop from scratch and retro-fits various space mission tech together to communicate with Earth. His wit and personal thoughts are translated through video logs he records during his long stay on the planet. This to and fro, from survivalist kit-bashing and video logs, is much of the film’s setup.

Things get more intense as NASA (alive and progressive in this film’s future) become aware of Watney’s presence on the planet (via satellite images) and struggle with the logistics of mounting a rescue. What proceeds is something akin to mashing Castaway, Apollo 13 and Gravity together, with the ever increasingly vulnerability of our hero, the unorthodox methods NASA use to help him survive with little to no supplies, and a dizzying rescue plan. You can see that Damon has physically trained himself for the role and the challenge of making the premise believable.It is a very beautifully shot film, reminding me of Interstellar but with a more grounded, more human experience at its core. It is often jargon heavy, much like Interstellar and Apollo 13, preferring to suggest realism rather than comfortable layman’s terms which tends to wash over you as something you should just accept and move on with.

On top of this are the occasional indulgence in deux ex machina devices that feel far too convenient in what is an otherwise “realistic” experience. As realistic as a man stuck on Mars can be anyway.
With the aforementioned hurried opening, I’d say secondary characters aren’t quite given enough screentime, the film heavily weighted to Damon’s character. I never got to know these people and so didn’t especially worry about them when things got dire. Also, Sean Bean was in this? I didn’t understand his character either, apart from being “the sympathetic voice” I had no idea who or what he was.

At its worse it has some conveniences (probably due to compressing Andy Weir’s book to film length) and a lot of characters are left at the wayside, but at its best it has a charm and an excellent visual flare that cannot be ignored. I enjoyed it.