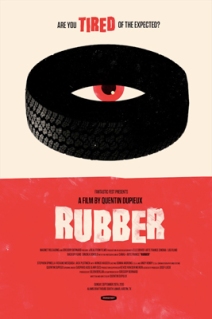 You know… sometimes as a reviewer a film comes along and challenges your ability to think and write cohesively because what was witnessed was so completely random.
Rubber, follows a sentient killer psychic tyre, that wakes up in the American scrub-lands only to start popping small animals and people’s heads. Believe it or not people, this is the part that makes sense!

The film begins with a desert road covered in chairs, and a man holding fistfuls of binoculars. A car drives and hits every chair before stopping, only for a sheriff to climb out of the boot and begin to explain to an audience of people watching, the things in life that have “no reason” for happening.
Yes… this film is self-aware of its oddity, and what proceeds is a weird snuff movie with an audience watching through binoculars and a sheriff who thinks he knows why everything’s happening.

It isn’t horror, as it prefers to be bewildering or straight up comical. Gory yes, but the film moves at a gentle, sombre pace and actually has some decent photography of dusty, wide landscapes (and regular framing of circular objects).

I… don’t even know how to rate this; its self-awareness and humour saves it from being hopeless, but… what even is it?? I didn’t think much of it, but I didn’t exactly hate it either.

“Wait, it isn’t the end; its been resurrected as a tricycle!!” – I never thought I’d hear that spoken.