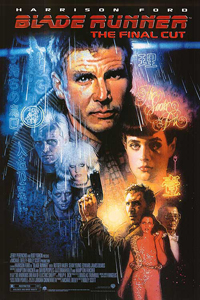 Perhaps one of Sir Ridley Scott’s most visually striking films, Blade Runner is a narrow view of classic science fiction themes and values shot in a gorgeous film noir style.

A Blade Runner is a special police officer tasked with the identification and neutralising of synthetic humans known as Replicants. Replicants appear by design exactly like humans, and only a trained eye can distinguish them, they were sent to other planets as a means of colonisation before humans could move there. On Earth, Replicants are outlaws. Decker is pulled out of retirement to hunt down four rogue Replicants who have returned to Earth, simultaneously meeting a new type of Replicant, one that blurs the line between machine and human even further…

Ridley Scott has come under creative dispute in recent years, from muddy waters such as Prometheus to downright critically slaughtered experiences such as The Councellor. Of course, I have seen Blade Runner before, many moons ago, but that was not The Final Cut.

Luckily for me, the differences between what I remember from The Director’s Cut and this Cut seem to be minor, and I am prepared to wager that Scott ironed the film smooth for this “Final” edit. The film is still incredible and beautifully composed. As a big science fiction fan, I love the merge of dystopian future with old school film noir lighting and camera work, I love the score by Vangelis (Greek Academy Award winning composer for Chariots of Fire) the mesmerising visuals, mostly designed by futurist concept artist Syd Mead who also designed the vehicles from TRON and later TRON Legacy and some conceptual work for Aliens.

Perhaps the last great film noir, Blade Runner is a treasured product of its time. Scott only loosely based his film on Phillip K. Dick’s novel “Do Androids Dream of Electric Sheep”, and told the author this would be purely a piece of entertainment and not “an esoteric film”. He even got assistance and input from Ford and Hauer making the film.
While it is a great visual experience, in light of more recent science fiction I feel Blade Runner doesn’t delve far enough into the morale and emotional aspects of human and machine. Subtext is certainly present but it is very underplayed. The film’s first half is excellent, the investigation of Replicants, but this is mostly abandoned when the villains acted out their aggression and the hunt is resolved with action rather than intelligence or guile, what would define a Blade Runner or the difference between man and machine.
I also didn’t like the romance, that feels shoehorned in. I don’t believe that a man who’s scarred by his career of hunting androids disguised as humans to the point of heavily drinking, would suddenly fall in love with one that’s even better at disguising itself.
But since Scott defined this as “entertainment” rather than anything truly deep (like your Ex Machina or Ghost in the Shell, which both delve into the morality of the issue) one can only critique this so far, plus, Blade Runner came first! This is the film Scott made, and as a final product it is excellent.

It is an excellent science fiction film noir, simply put. It is an exceptional film as there is no other quite like it, perhaps Ridley Scott’s most creative and thought provoking film. I certainly wish there was more of it!