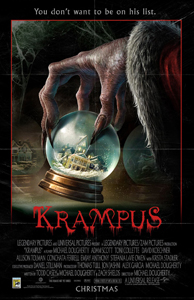 A great little festive horror, Krampus delivers the sort of cheeky horror only seen in films such as James Gunn’s Slither, or Trick ‘r Treat. An underrated and fun time.

The film is based off the German folklore of Krampus, a spirit who punishes naughty children. They hold “Krampus Runs” which involve young boys dressed as Krampuses parading the streets, while the Austrians hold Krampusnacht, a festival for the character.
The film follows an American family of five hosting Christmas at their home for their extended family; the mother’s sister’s family of five, but seeing as how they cannot stand each other, the Christmas Spirit is broken. The family’s son, the youngest, Max, wishes nothing more than for it to end… summoning a supernatural entity to their neighbourhood.

This film is surprisingly entertaining! I knew very little going in, but with the opening featuring a Black Friday-esque mad rush of shoppers trampling the doors of a mall, I knew it would be a good time. In fact the film spends a lot of time establishing Christmas, and the amount of materialist culture that has grotesquely built around it over the decades, warping people’s perceptions and making us all miserable and cynical. Max’s mother is the classic figure of traditionalist Christmas, she provides an elaborate dinner and hosts everyone… only to be unfairly shot down by her brutally selfish extended family.
This is the majority of the film really. Each of her family gets a knock: her husband gets into testosterone arguments with her sister’s incredibly right wing husband (think Burt from Tremors), her daughter wants to be elsewhere, and her son is embarrassed in front of everyone with his belief of Santa Claus.

Even before the crazy insanity kicks off, you realise that this is actually intending to be a genuine Christmas film, both scary and sentimental. Director Michael Dougherty (who directed festival horror anthology Trick ‘r Treat) even cited It’s a Wonderful Life and A Christmas Carol for their intensely dark messages showing “broken characters who experience a darker side of divine intervention. They need to be scared straight.”
While Krampus is far, far more comical, goofy and scary than those classics, the sentimentality is still there, and elevates Krampus above the normal horror film.

And then the crazy stuff kicks in, with about thirty minutes of run time remaining!
I am happy to announce that Krampus involves a lot of practical effects; actors in costumes, masks, all great and detailed. Krampus isn’t alone, he has an army of evil, demonic toys and even elves to run siege on the neighbourhood while it is in the grip of a snowstorm. These monsters are both very grotesque (afraid of dolls? Beware) and weirdly cutesy (Gingerbread men). I really, really enjoyed the practical monster effects. I got a real 1980s fantasy feeling from this film, there was very few CG moments that pulled me out of it.

The comedy of the film is effective but somewhat low key. I am okay with that; comedy that is too strong or too pop culture based can put me off. The family do get some great zingers in against each other.
I think my only gripe with the film was the convenience of Max’s grandmother being German. The film really expects you to just accept this and move on, but the family is so very American, and she is so very German… it just feels convenient. She herself though is very good in the part.
There’s a great animated segment when she explains Krampus, its really nice to see!

Sadly, Krampus isn’t going to be in cinemas long at all, but I recommend it for anyone looking for a festive scare! It isn’t exactly award worthy but I loved the practical effects and being reminded of old genre films like Tremors and Slither.