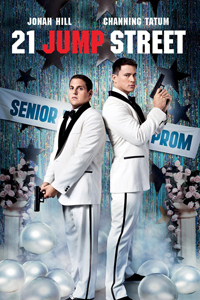 Comedy is always a tough sell for me, I don’t go in for them because my sense of humour is very particular. 21 Jump Street was very middle of the road.

Two opposing students from High School, a nerd and a jock, both sign up to the Police force together only to become partners. They are then given the task of going undercover at a High School to track down drug trades specifically targeting teens.

21 Jump Street is a film remake of a late 1980s thriller drama television show of the same name starring Peter DeLuise and Johnny Depp. Though I never saw the show, I can only imagine the descriptor “thriller” does not translate to a movie adaptation that’s a pure comedy. But I wanted to give it a shot, especially as it got good ratings and a sequel.

The film starts out very rocky, and I was not impressed. Something of a fatal flaw with comedies; if you start out bad, it takes a lot of effort to pull the audience back onto your side again. We start with an unnecessary flashback to Channing Tatum and Jonah Hill at High School; it is so brief and establishes almost nothing, only that Tatum is a jock and Hill is a nerd.
Really, we need a whole segment just for that? Surely audiences would simply buy this with some dialogue and jokes during their time at the Police Force to establish their characters?

I cannot say their undercover sergeant, played by Ice Cube, is especially funny either. Though there is a colossal self-awareness here which can bring a smirk here and there, it feels a little too forced, and Ice Cube’s opening speech is a defining moment for this.

But, once the film gets going with our airhead heroes tracking down the drug dealers and struggle to comprehend how High School has changed (Tatum’s initial return to school is a highlight for sure) things improve steadily. It never split my sides with laughs, perhaps a little too many “Oh hey, Jonah Hill is fat and rubbish at fighting and/or chasing people” moments.
Possibly one of the greatest moments the film has to offer is right towards the end… but unfortunately I cannot possibly say what it is without spoiling it. It was a nice touch, and certainly got me to sit up and pay attention!

It isn’t bad, but it isn’t especially funny either; probably good background noise to accompany you while you do other things or host a party! 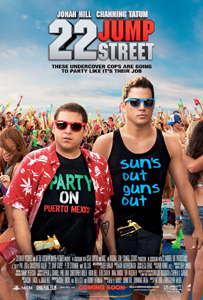 The buddy cops are back, and everything is much the same as it was!

Undercover cops Schmidt and Jenko are back, but this time they are trying to shut down a drug dealership in a college. Naturally, they have to be college students! What could go wrong?

Nothing really.
22 Jump Street, asides from a couple of stunt sequences (especially at the start) doesn’t feel bigger or better than its predecessor… something you don’t expect from a sequel these days. There’s a lot less intricacies and character development here, even the drug trip sequence felt more shoehorned in just to keep in line with the original film. As fun as this particular sequence actually was!

Jonah Hill and Channing Tatum return in the lead roles and they are both as good as they were before, but the material they have feels even thinner. There’s a brief moment of the classic “friends drift apart in college” scenario, which is quite funny, but a lot of the initial build up is made of “Jonah Hill is fat” or “Channing Tatum is old” jokes. Heck the film’s “villain” isn’t even that prominent or fun compared to the first film.

Paradoxically, 21 Jump Street‘s unfunny Ice Cube returns and actually steals the show this time. Hard to believe, but a sequence involving him, his character’s daughter and Schmidt is very funny! Ice Cube literally chews the scenery and looks disgusted, and even an encore of the joke remains funny later in the film.
22 Jump Street also has perhaps the best end credit reel I’ve seen in a long time, seeing a barrage of made-up sequels and their subtitles was great. All the way until the two cops are in space, or they replace Jonah Hill with Seth Rogen and no one but Channing notices. Great stuff.

Much like the first film, the best material is towards the end; when pretense and school stereotypes are not being hammered in and good action and action stereotypes can take their place.

I can’t say it held my attention any more than the first film, but I will say it is consistent with the original film, and I do like my consistency with sequels. If you enjoyed the first you will definitely enjoy this one.