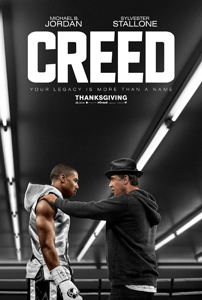 A respectable and well crafted spin-off from the Rocky franchise, Creed doesn’t pull its punches; it excels as well as anyone could have hoped.

Adonis Johnson is alone in the world and only wants to fight, ditching his decent office job to seek a trainer to teach him how to box professionally. He knows where the best man for the job lives, yet that man has a lot of emotional baggage with Adonis’ father… baggage that may make or break any chance of success…

This isn’t like any Rocky movie you might have seen before, while it carries familiar elements you can sense that this is a spin-off to be treated as its own creation. For the first time, Sylvester Stallone had no hand in writing the piece; he had considered the character done and finished, until director Ryan Coogler came to him with the idea. While not feeling exactly necessary, and definitely not written by Stallone, there is still definite fondness and heart here that respects its origins.

We follow Michael B. Jordan as Adonis (lifting himself far and above that recent film he was in…) and his relationship with Bianca, his neighbour and singer who at first keeps him awake with her music but then falls in love with. They have a great chemistry, and I actually appreciated her character a great deal more than expected.
Everybody’s favourite Rocky Balboa returns, but like Han Solo in the recent Star Wars movie, he is old. Rocky is now truly alone, brother-in-law Paulie now rests beside Adrian, and Rocky himself lives in the past; running his restaurant rather than fighting.

Indeed, the star pushing seventy does not enter the ring!

Having recently watched all of the Rocky films, I greatly enjoyed the drama and chemistry between Jordan’s Adonis and Stallone’s Rocky, in a strange way, Creed actually vindicates my least favourite film of the franchise Rocky 4! The two actors have so much emotion to deliver and convey, and they succeed.
All of the film’s spirit and strength lies with these two. I greatly enjoyed some less apparent undertones, such as Adonis’ struggle with his father’s legacy mirroring Rocky’s own son’s anger to his father in previous films.
Tonally the film is strong; surprisingly graphic for a 12A! I wouldn’t take young kids to this; there are visceral shots of blood and sexual content. I was more than a little surprised. But there’s also a great sense of humour too, mostly revolving around Stallone’s old man Rocky. It isn’t insulting though, it is warm and affectionate fun.

The film’s narrative is a retread of the original Rocky, which is why this chemistry stands out so powerfully (without that, it could have been a remake) Adonis has little conviction and little training, but gets a shot at the world champion. This is due to director Ryan Coogler’s personal love for 1976’s Rocky, much like J.J Abrams’ love for Star Wars!

Our antagonist for Adonis is, humorously, from Liverpool England! It is very refreshing to hear a British accent in the Rocky franchise, and maintains the idea of hiring real professional boxers. He isn’t given much to do; similar to Apollo in Rocky 2, but he is good as a means to an end.

Creed is a great film for the Rocky franchise to create; it brings in new fans and lovingly respects what had come before it without treading on anyone’s toes. Chemistry and emotion are key, and it is definitely up there with the best of the series.