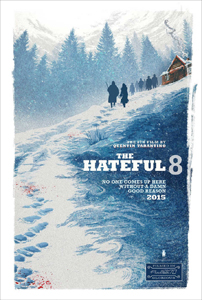 Tarantino’s eighth directorial piece is a Western that almost didn’t happen, but we should be grateful that it did!

John “The Hangman” Ruth has himself a bounty worth ten thousand, but his trip to Red Rock for the execution is thwarted by a blizzard. He and his prisoner must stay at a cabin until the storm passes, but also staying there are six other strangers: from an African bounty hunter with a Presidential letter, a Mexican, a hangman, and a civil war General… But all is definitely not what it seems.

The Hateful Eight is accurately the eighth film from Quentin Tarantino, and features an alumni of his favourite actors: John Ruth played by Kurt Russell (Death Proof), Tim Roth (Reservoir Dogs), Walton Goggins (Django Unchained), Michael Madsen (Reservoir Dogs) Samuel L. Jackson (Pulp Fiction, and five other of Tarantino’s films!) and even James Parks who featured in both Kill Bill volumes. So yeah, something of a celebration for fans of the director’s work.
Tarantino has always had a distinct style; it has given him prestige despite only directing eight films in twenty-four years! The Hateful Eight boasts a 70mm celluloid release, offering a massively widescreen experience, which really works with his landscape shots that dominate the film’s first act. Maybe not as pretty as The Revenant‘s beauty, but watching it on the largest screen at my local cinema, I appreciated what Tarantino was achieving. It works especially well making the audience feel like they are inside the cabin, Tarantino’s details and set dressings are all deliberate (no doubt festooning repeat viewings with foreshadowing and blatant references!)
As if mimicking his original film Reservoir Dogs, the film is remarkably narrow in scope. Ninety percent takes place within this log cabin, a cabin that is simply one large room with various areas. It feels like Tarantino is shooting a theatre production!

So yes, Tarantino fans, this film is all about the director’s famous/infamous script writing style and it does not disappoint either! Like a character study, we see eight distinct characters with unique histories and viewpoints clash in battles of words; watching a web of betrayal, deceit and murder escalate. Every actor is having a great time too, especially Samuel L. Jackson who steals most of the movie, Tim Roth is having a riot and it was great to see him in a Tarantino film again. Kurt Russell and Jennifer Jason Leigh also sell a fantastic jailor and prisoner dynamic. So much great, popping humour throughout.
This is why Tarantino nearly pulled the production of the film when the script of the film was leaked. The director had felt betrayed and only later continued production, likely having altered the ending in the process.

At two hours and fifty minutes (170 minutes) The Hateful Eight might seem too ponderous and pedestrian for some; but Tarantino’s classic use of music and writing style keeps you interested and entertained. His black and dry humour is very strong here! When the film clicks into a sort of locked-room mystery, it gets really good.

Dialogue heavy and character filled, I enjoyed The Hateful Eight! While more familiar to Tarantino’s past work, it is still clear the man can direct unique and intriguing stories.