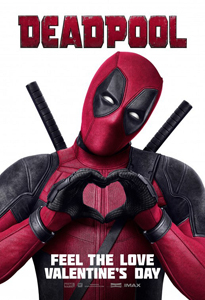 Studio 20th Century Fox delivers an off-the-wall adaptation of Marvel superhero Deadpool, capitalising on a character in their repertoire with ludicrous respect, making for the first straight up adult comedy of the genre.

Mercenary and thug-for-hire Wade Wilson finds the love of his life, but not long afterwards he is diagnosed with terminal cancer. Trusting a shady organisation promising to cure him, he gains super regeneration powers but blistered, ruined skin from his torturous ordeal. Now he is out for revenge, especially when the same men kidnap his girl!

Deadpool, Marvel’s mischievous “Merc with a Mouth” has gained status of cult favourite due to his infamy; a character who’s main trait is to break the fourth wall (to talk to the audience / reader) and have a ridiculous sense of humour, as well as his super regeneration causing him to be bloodily dismembered regularly only to regrow his limbs. Deadpool was affectionately given a 15 certification in the UK and an R in the US.
Deadpool’s character isn’t new to the recent comic book movie craze. Ryan Reynolds played him once before in 2009’s Wolverine: Origins. But the anger from fans at that film’s treatment of the character (sewing his mouth shut, for example) meant this film all but abandoned everything about that treatment. Amazingly though, Reynolds himself was praised for his own input, and remains to personify the character once again!

The 2016 film is a ridiculous adult comedy, but in doing so it breaks the mold of every other comic book movie of recent times. It picks up its R rating and runs with it; this isn’t any typical superhero movie (like Deadpool says: This isn’t no ordinary superhero movie) people are decapitated, limbs are cut off, people are crushed and maimed, with plenty of blood. There’s sex, plenty of it (in fact, its a montage) and possibly the darkest and most horrid origin story any superhero has ever received. Yet still the film had to be cut to allow it a 15 rating!
All the while Reynolds is mugging to the camera through that spandex mask to his heart’s content. Using the character to rip on his past film failures (Green Lantern, Wolverine: Origins) to referencing other existing comic book movies and a host of pop culture and movie references to match something like Scott Pilgrim Vs the World. It is all very funny and incredibly stupid, yet incredibly despite 20th Century Fox’s cautious 80 minute run time, it doesn’t get old! The audience actually wanted more!

It should also be mentioned that although this is effectively “man saves girl” at the end of the day, our three female characters are awesome. Including Gina Carano’s villainess and the absurdly named “Negasonic Teenage Warhead”!

Storywise, there’s not much here. Man gains superpowers, man (in unorthodox methods) saves girl. With shallow villains, the film otherwise latches onto Colossus as the resident X-Men character who regularly has to deal with Deadpool’s murderous antics.

While watching I found myself relieved. To see a 15 rated superhero movie was almost rejuvenating! After the endless droning of safe 12A productions that you can take your toddler to see, finally we get a film were superheroes wielding their weapons cause the damage they would actually cause! Yes, Deadpool has two swords, he slices a guy clean in half! Wolverine should do that sort of thing; his trait is razor claws!
It might seem like an artificial reason to like a film, but honestly not since Blade 2 (fourteen years ago!) have I had so much fun watching a superhero action movie; this is gory and punchy. Deadpool (alongside this year’s Suicide Squad) could be a change in the superhero film genre. I certainly hope so.

So yeah, Deadpool isn’t a master class in theme, or an award winner in execution or film making. It doesn’t have any of the gravitas of Captain America: The Winter Soldier, or the pretentiousness of Man of Steel, or even the cookie-cutter safety of Ant-Man, no this film is in a league all of its own.
It is stupid, it is reliant entirely on its own self-awareness and it relishes its own silliness and violence, but in today’s market there’s no better breath of fresh air!

If you like your comedy action movies, and your superhero films, Deadpool is unavoidable.

Additional Marshmallows: Deadpool’s flamboyance has allowed the film’s marketing team to go crazy! I’ve never seen such great trailers and marketing for a film before, from the character spending Halloween trick or treating with kids, to Deadpool himself giving legitimate advice on testicular cancer, or the title being spell out in emoticon form… Or even this little beauty, playing off the film’s Valentine’s release: 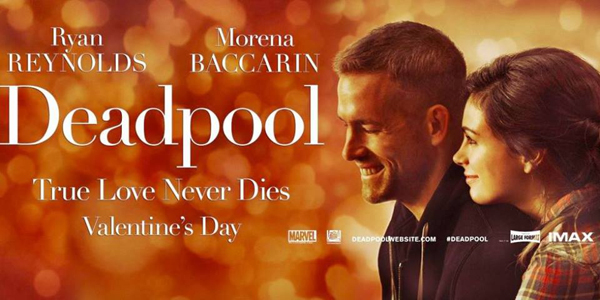