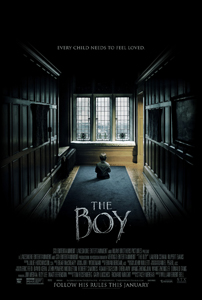 I had every reason to be disappointed in The Boy. I don’t fall for the scares of ‘possessed doll’ horror films, but after putting up with it for a while, it actually evolved into something quite unique.

A young American woman travels to the United Kingdom to babysit for a rich older couple looking to leave on a vacation for a couple of months. But what she doesn’t expect is that the old couple’s child is in fact… a porcelain doll.

Lauren Cohen (of The Walking Dead fame) plays Greta, who has the difficult task of apparently babysitting a doll for several weeks within a massive old mansion. The old parents give very strict rules on how to look after their ‘child’ and seem very grave and severe about the situation, not confused or mad. Greta does what most people would do: consider this easy money and ignore the doll, tossing a blanket over its eerie countenance.
But naturally, the rules are there for a reason, and strange things start to happen around Greta; her clothes vanish, she gets trapped in the attic, noises rattle and echo around the house. Her only ally is Malcolm, a local grocer who is employed by the parents and works even in their absence.

I was not convinced initially with this movie… it felt like every other doll possession story and not an especially well-crafted one; its foreshadowing seemed too deliberate for its own good. Greta’s reason for being in the United Kingdom is for escaping her abusive boyfriend… it does feel like the film is going in one direction.
Then something happens that doesn’t normally and then something else happens that doesn’t normally happen! Breaking some conventions, at least in terms of the typical possessed doll horror narrative, actually elevates it above what is otherwise a fairly generic experience.

I cannot say it was very scary. In fact I watched this 15 certificate movie the same day as 10 Cloverfield Lane which was a 12A in the UK… and honestly, I found Cloverfield Lane creepier. The Boy has a lot of suggestive themes, and very traditional jump scares and tension building, people who are scared of dolls and this sort of horror film will find it scary for sure!

A surprise. It was a little different from what I expected, and by the end of it I was impressed. If you watch it, just remember to give it time to develop.