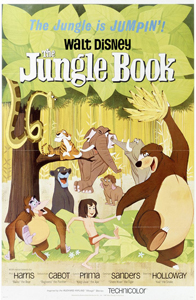 Like most Disney classics, The Jungle Book is starting to show its age, but it is an enjoyable light hearted walk through the jungle with some great songs.

Mowgli is a boy raised by wolves in the jungle, and while he is content living with them and the other animals, a tiger called Shere Khan wants him dead. But with the help of Bagheera the panther and Baloo the bear, maybe Mowgli will find the way to his real home.

The Jungle Book is almost to the Disney Corporation what My Neighbour Totoro was to Studio Ghibli. Sadly, Walt Disney died before he could see The Jungle Book completed and the company was hurting after a poorly performing Sword in the Stone (how, I have no idea; that film is amazing!) meaning everything was riding on the film. Disney wanted a much lighter, happier experience; if it didn’t work, the company could have actually collapsed.

Wow, hard to imagine that nowadays.

So my thoughts are two fold about the original Jungle Book. It is incredibly simple and not heavily immersive, but very enjoyable and a great musical.
Story-wise, our main character Mowgli is mostly a whiner who is just dragged through one scene to the next, he meets many colourful characters which have various archetypical traits attached to them: Elephants that are soldiers; vultures that are a parody on British band The Beatles, and a monkey king from New Orleans. It all feels quite divided, the film is mostly just a series of events.

The characters are what makes the film strong, especially the dynamo of Bagheera the panther and Baloo the bear, who end up squabbling over Mowgli like dysfunctional parents; trying to decide what’s best for the boy. One voice of logic and reason, the other of a kind and carefree lifestyle. These two are great, voiced by Phil Harris and Sebastian Cabot.
Kaa and Shere Khan share a couple of great scenes too, George Sanders gives the tiger a phenomenal voice which is very memorable.
And of course, the music. Those infectious, ear worm songs like “Bear Necessities” and “I Want to be like You” are so good that it is possible they saved the Disney corporation alone. You will watch this film and find yourself singing one or more of them later!

My thoughts on the Jungle Book haven’t changed since I was a kid, they were always lukewarm. I love the animal characters, Mowgli was annoying and I don’t care for musicals (this is mostly an exception, because the songs are so memorable) I was aligned more with Sleeping Beauty.

So nowadays, it is good fun and a nice distraction and a historical landmark for Disney. I’m not convinced kids these days would connect with it, maybe very young children.