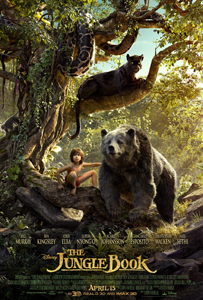 Told from the perspective of Bagheera the panther, Mowgli is a “man club” who grew up among the wolves. But when a vicious tiger known as Shere Khan emerges seeking revenge on man who burned him, he targets Mowgli. Bagheera must get the young boy to the human village before the beast can kill him.

I had pretty low expectations of Disney’s new take on The Jungle Book… The original is perhaps one of the most cherished and loved films in their pantheon, and what I learned from the atrocious Maleficent film is that Disney’s current “live action” fad is not to be trusted. That, and this barely qualifies as live action, asides Neel Sethi as Mowgli, every other character is (of course) CGI.

So understand how big a deal it is when I say: this is Disney’s best re-interpretation of their own work to date. In fact… I hesitate to say, I prefer this to the original…

That is a matter of opinion. There will be people who cherish the original and all of its fluffy simplicity and lackadaisical storytelling, and they will see this (perhaps) as an affront. However, Jon Favreau has kept nearly all of the original’s story beats intact and in order, only the characters, their motivations and the story’s values are vastly improved.

I’ll be the first to say, I found the voice acting from the trailer a little… uncanny. The voices did not feel associated with the animals, it felt like Idris Elba’s voice plain as day, and a tiger oddly in lip sync. Shere Khan for me had such an awesome voice in the original by George Sanders, and I thought this disconnect would doom the film.
Not so. After a time the voices were one and the same with the animals. Elba and Ben Kingsley (who plays Bagheera) especially. Very reminiscent of the original, yet new. Bill Murray as Baloo is perhaps the most familiar, although his initial interactions with Mowgli are purely selfish but played for good laughs.

Perhaps the biggest change and improvement is made to Mowgli. In the original Mowgli is mostly a passenger who is moved through scenes and reacts to things. Here, Mowgli is learning who he is; we see him with the wolf family and we see him trying to fit in but always having the desire to make things such as tools and devices. This baffles the animals around him and proves critical to his character’s growth. That and Shere Khan’s motivations towards him are greatly enhanced. King Louie is another one who gets a tremendous gear change in tone. In the original he just seemed a bit batty, a very child friendly image of a tyrant. Here… there’s no holding back. Christopher Walken’s turn at singing “I Want to be Like You” is… a bit weird!

Really the only character who is short-changed is Scarlet Johansson’s Kaa (originally voiced by Winnie the Poo’s Sterling Holloway) in fact the snake is practically used as exposition. Although that exposition had a gorgeous transition in it!

Overall, yeah I enjoyed it! The CGI is very good, of course prone to age within a few years, Neel Sethi sometimes looks like he’s talking to the air, but it is amazing what they can do nowadays. It is darker, but not too dark and still has a lot of fun moments (the little jungle critters who chatter around our protagonists’ feet are great) and it isn’t that long but feels packed.

If you are afraid for your childhood, don’t be. This is a good rendition of the same characters, brought into a new generation with love and affection.