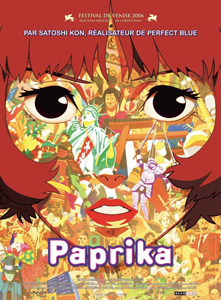 Paprika is a mind bending visual feast, giving life to the surreal landscape of dreams with a detective story.

DC Mini is a device that allows individuals to share dreams, to enter other peoples dreams and even allow others to alter someone’s dreams. It is now used for therapy and medical treatment, but when one unit goes missing and the risks of it being misused escalate, a detective and a leading therapist (and her dream state alter-ego Paprika) must discover who was behind the theft. Can they stop the dream world potentially invading reality before it is too late?

Wow, made in 2006 by the late Satoshi Kon (Perfect Blue) Paprika is a unique experience in modern anime. It could be described somewhere between Inception, The Cell and Strange Days, but not to suggest they are all similar quality! Paprika is an anime experience, full of weird and wonderful visuals and both dazzling colours and foreboding tones.
Unlike Inception‘s very clean, sterile dreamscapes, Paprika fully embraces what dreams are genuinely like with the use of powerfully creative animation. This is a surreal movie experience, where an invasive dream that overrides users of the DC Mini device (turning them manic or into a comatose state) is depicted as a colourful parade of inanimate objects! A parade that is equally bizarre, mesmerising and threatening in its otherworldliness. Things only get more surreal, as you would expect!

But luckily pinning this ballooning, unhinged surrealism is a concise thriller; a cop story about pursuing a culprit and also developing the character mysteries of our leads: Chiba Atsuko (and Paprika, voiced by Cowboy Bebop‘s Megumi Hayashibara) and detective Kogawa Toshimi (Ghost in the Shell‘s Akio Otsuka). These characters develop most fluidly and actually surprisingly, since you are so involved and overwhelmed with the visuals and the mystery. Kogawa’s story rapidly became my favourite part, a man haunted by a nightmare he wants to comprehend.

Perhaps the only negative I can muster about the film is the transparency of its antagonists. You very, very quickly realise what is going on (at least in terms of the basic narrative) and the true enemies are clear.
In their defense the antagonist has a great motivation; actually meaningful in the broader subtexts of the film, but perhaps the screenplay didn’t give their philosophies enough time to germinate. A second viewing would probably help this very minor issue.

It is a gorgeously animated and well constructed movie, and I would highly recommend it to those interested in the genre and in dreamlike fantasy films. Paprika boggles the mind, but does not outstay its welcome; the film distracts and immerses you completely and finishes satisfyingly.