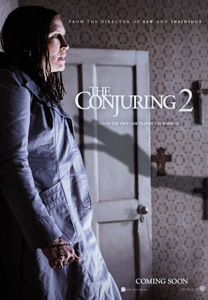 I can’t help but feel a little disappointed by James Wan’s sequel; it has a little too much Insidious injected into it…

Based off a true case performed by the Warrens, a husband and wife team of investigators helping the Church uncover demonic activity, the pairing travel to north London to help a family terrorised by a malicious entity. But when they get there, what unravels would be their most diabolical story yet.

I really don’t like Insidious or Insidious 2 (and I’ve yet to experience the third part) I cannot think of more shallow and deliberately forced horror movies in recent memory. James Wan however does know how to direct horror, however, I’ve witnessed as much when I watched  2013’s The Conjuring; a clever, atmospheric, taut haunted house story with decent jump scares at the right times.

I was all set to thoroughly enjoy The Conjuring 2.

The story picks up during The Amityville Horror, the Warrens are revealed to have been working on the aftermath of that paranormal disaster. But we are left with a prolonged pre-title sequence suggesting the horror of Amityville would persist, but now in London… and would draw the Warrens, especially Lorraine (played by Vera Farmiga once more), who finds her faith tested.
It is safe to say that The Conjuring 2 is not the same film as its predecessor. While Wan is still an expert in filming dank and unpleasant rooms, this time in a dilapidated British house in the 1970s, and Farmiga and Patrick Wilson (as her husband Edward) are still reliable in their performances. But… having said that, Edward has a strange way of being around her spirit-world sensitive, tormented wife… like painting a horrific demonic nun and laughing like its nothing.
That was the first moment I felt a real disconnect.
Then it was the usual possessed children’s toys, even people stumbling over children’s toys jump scares. Come on, I have seen these so many times!

Then the film just goes straight looney toons. A spirit monster manifests itself, looking like a bootleg Jack Skellington made of umbrellas and hat stands. A mo-capped monstrosity that destroys all sense of tension and atmosphere as it roars and quips about being The Crooked Man!
I… I genuinely didn’t know how to react, but it certainly was not scary! The film stumbles about with classic, dogeared horror cliches. How did no one wake up with all this noise and chaos happening at night? Convenient blocking wooden door is impossible to break with a fire axe. Goofy make-up and contact lenses, a lot more in keeping with The Exorcist (except without that film’s masterful atmosphere!) So to say this film completely disenfranchised me is an understatement.

There are good moments… but they are sorely lacking with the weight of ridiculously over the top nonsense horror and cliches. One particular standout moment is a meeting between Edward and the spirit haunting the house. It is a gloriously tense scene with fantastic camerawork that keeps the horror just out of sight. Deliciously tense. The north Londoner family are good too, the child actors are decent, if a little shallowly written with yet more horror cliche.

Honestly, this film shouldn’t be called The Conjuring 2. It could have been The Amityville Horror 2, it has more connections with that film than James Wan’s original! Both in storytelling and in tone. Simply too much Insidious poison mixed into this…

Additional Marshmallows: Can someone tell me why horror films release in the middle of summer, while Marvel releases Doctor Strange on Halloween?