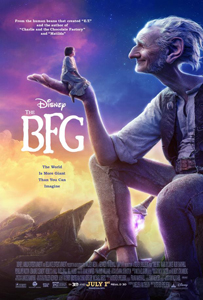 The BFG is a very humble, slow and Dahl experience! I enjoyed it, but only because I am familiar with the story.

Sophie is a girl living in a London orphanage who has her life turned upside down when a Big Friendly Giant takes her to the Land of Giants.

Based off of the Roald Dahl children’s book of the same name published in 1982 in the United Kingdom. I feel as though I should have re-read the story or at least watched the animated movie from 1989, but there was a lot I could remember.

It seems surprising for Spielberg to be directing such a resoundingly British children’s story, especially something as weird and bizarrely domestic tale as The BFG. I guess his name gives pull for the American audiences.
The BFG is a hard story to sell; it is basically about Sophie discovering how this giant lives and what is involved in his job of Dream catcher and Dream blower. The BFG literally catches dreams in the Land of Giants, then brings them to our world and uses a copper horn to gently blow the dreams into sleeping humans. That is most of the story! Antagonistic elements come only from the other giants, who want only to eat humans, and this tests the relationship between the two characters.
But the other giants aren’t really given a great deal of screentime… They are a persistent threat, but asides bullying the BFG (which is more bizarre to watch than anything else: riding him on a garbage truck towards another giant rollerskating on cars??) and a chilling story told in exposition by the BFG himself. I feel as though a more threatening presence would have helped, it isn’t like Spielberg avoids doing that in the past.

Perhaps the best element of the film is Mark Rylance as the BFG, fortunately! Rylance worked with Spielberg before in last year’s Bridge of Spies, and he carries off the gibberish English really well with a sort of Yorkshire farmer accent. It made the BFG very likable and innocent. Especially compared to the other giants!
It is a delightfully designed, scored and CG animated experience. The BFG’s house is full of objects that throw off the scale of things wonderfully, the music and visuals (of course, it is a Spielberg film!) are great, even the BFG’s computer animation is exceptional.

But there is something lacking in it. Perhaps it is just the redundant stakes, perhaps the adaptation from the source wasn’t right, but the third act appears to come out of nowhere. Sophie sees a picture of the Queen of England in the BFG’s house and immediately decides on a course of action that takes them both to Buckingham Palace to form a plan with The Queen to capture the evil giants.
Woah. That escalated quickly.
Add to the fact that we still don’t feel resoundingly threatened by these villains, and that modern society (or the world, for that matter) doesn’t view the Queen of England with any particular air of power. It all gets a little farcical, and actually turns straight into a comedy suddenly.

So yeah, I liked watching it, but I did feel a little restless in doing so. Great visuals, great Spielbergian craft, but the story… for whatever reason, dated, badly adapted… just didn’t feel focused or driven. I feel like if you don’t know the source material well, you probably won’t get much from it.