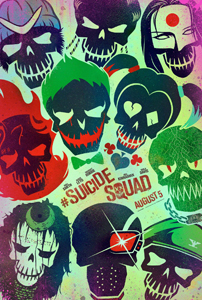 DC comics’ next installment in its cinematic universe is great to look at, but is not the solid experience audiences were hoping for…

In the wake of the cities of Gotham and Metropolis being devastated by the likes of Superman and other “metahumans”, the Government enlists the help of a team of supervillains to destroy threats to humanity. The logic being that their deaths are of little consequence.

The hype around Suicide Squad is unreal. Perhaps due to the wealth of material when it comes to DC Comics villains (often outdoing their hero counterparts) and that many of these characters have never been seen in live action, and like Marvel’s Guardians of the Galaxy, Suicide Squad is based off a lesser known series and had some kick-ass trailers for its adaptation!
The film features a host of brand new characters (new to general audiences) Deadshot, a hitman played by Will Smith, Harley Quinn played by Margot Robbie, The Enchantress, Killer Croc, El Diablo, Slipknot, Katana, Rick Flag and Captain Boomerang.

Yes, I had to look up those last four.

The film starts off badly, and more or less hints at the snowballing effect that ruins this experience overall. Instead of establishing these characters, or even giving them chemistry to bounce around, it just barrels through the origins and backstories with the grace of a Gatling gun. This is worst felt for Harley Quinn’s backstory with The Joker (the clown prince returning anew by Jared Leto) which is frankly the best way into the film for the mass audience, given most people know it from the Batman Animated Series. But here it is woefully rushed, along with everyone else’s stories.
This carries on throughout the film as the screenplay decides to forego a traditional storytelling structure for “cleverness” and a “twist”, which falls completely flat and feels unnecessary.

Why can’t we just have: here’s a bunch of bad guys, they have to fight something worst. They do it. The End.
Why does everything have to be edited like Inception?

The “something worse” is an ambiguous enemy. A horde of amorphous black crystal creatures that our anti-heroes mow down with little danger to their lives. While entertaining, the film’s second act starts to feel like a shooting gallery; I started to think it was DC characters thrown into the middle of the grey soup of a movie, Battle Los Angeles.

Suicide Squad feels like it is made of numerous parts which in themselves would make awesome movies. It is skimming off the top of the DC ocean; greater depths are waiting for plundering. The Joker and Quinn’s tattoos not withstanding the design work here is topnotch. In fact the design and production value both are really good and there is a good sense of an expanding universe. The sequence of Joker and Quinn being chased down by Batman was so classic it was practically straight from the cartoon!
I really want to see these characters return, either in a Suicide Squad 2, or individual cameos scattered throughout future DC films. There wasn’t a performance especially bad… even if the script is woefully handled.
I had to wait until a scene with our characters in an abandoned bar, over an hour into the film, before I felt any chemistry between them. But it was good chemistry!

Margot Robbie steals the show as Harley Quinn, perhaps the most anticipated character and definitely deserving a new entry in the franchise. Leto’s Joker is good too, but is mishandled here; feeling more or less pointless and only a vehicle to drive Quinn’s backstory.

Overall, Suicide Squad’s screenplay feels very damaged and over-edited. Whether this is due to studio interference / reshoots in light of Batman Vs Superman‘s rapidly depreciating critical reaction, we don’t know.
But unlike Batman Vs Superman, Suicide Squad was enjoyable and somewhere deep down it is a step in the right direction for the DCU. And unlike BvS, I want to watch it again.

Additional Marshmallows: This is the definition of what I call “a trailer movie”; see Matrix Reloaded, a film that’s trailer has better editing and pacing than the film itself.

Additional, additional Marshmallows: I have trouble imagining what the UK’s 15 certificate was for, outside of a brief moment between Quinn and Joker, there wasn’t anything a 12A could not cover.
Most of the initial critical opinions are completely baseless; over-sexualised Harley and gun violence? This isn’t any worse than literally hundreds of other films out there.