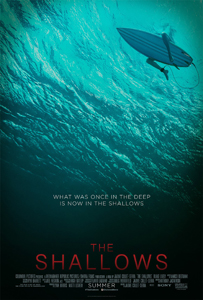 Wow, I was not prepared for how good The Shallows was going to be.

A surfer looks to get away from her troubled life by going to the waves at a secluded bay, but when she goes just a little too far out, a great white shark arrives in waters far shallower than normal. Now stranded on a spit of rock, a battle of wits between human and shark begins…

From the get-go, The Shallows does something I really enjoy in film; it has a extremely limited number of characters. In fact, ninety percent of this movie is an isolationist survival movie. Here we have Blake Lively (TV’s Gossip Girl and Green Lantern… oh boy, let’s forget that last one) as Nancy, an older sister, daughter and budding surgeon trying to get over the death of her mother by taking a trip alone to a beautiful bay and surf.
Exposition is given early through some interesting phone conversation, interesting visually as it overlays the face-time conversation on top of the film, like Windows.

Then that’s it. Nancy takes to the surf, and we get some great underwater camera work and photography of the waves (and Nancy herself, let’s be honest) but if you know what’s going to happen… even then camera dipping beneath the surface, showing the coral and rocks below… there’s already a sense of foreboding. What happens next is some truly grueling experiences that I was not prepared for.

Seriously, you probably wouldn’t want to get into a bath after watching this film.

Nancy is trapped, surrounded by razor-sharp corals, with only a tiny bit of rock to rest on and of course… the most pissed off great white shark you can imagine.
The film does so much with so little, and it even paces itself incredibly well as we can only speculate how Nancy is going to get out of this! It is surprisingly gory too. If you have trouble with blood and wounds… I know I was squirming… you should watch out!

It is a horror-thriller movie. There are some grim but visceral moments throughout. The survival aspect and the backstory of the character really make you root for her and really hate the shark. This really is the best shark film since Jaws. No joke.
There’s even a great light-relief element. I really don’t want to spoil everything because it made me smile such a lot. Did not expect it.

There are only minor issues with the film. Nancy is alone, so as a coping mechanism she talks things through to herself. This is welcome as it is understandable, but on occasion it isn’t necessary. There’s the odd trope of horror/suspense moments, but really, I barely cared since the film was so well paced.